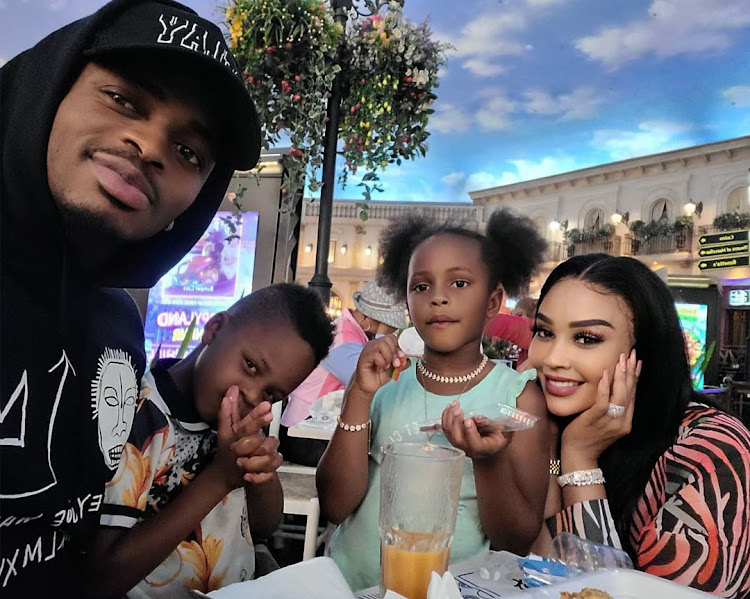 Tanzanian singer Diamond Platnumz made another visit to his children with Zari in South Africa.

In her latest update to fans, his daughter Princess Tiffah informed her followers that the singer had visited them and they were now too heavy to be carried.

Diamond in the video is seen carrying Tiffah and her brother Nillan into Zari's lavish home.

He struggles with multi-tasking and is heard him saying how heavy his children have become.

"I gotchu, you fine?" he asks the children while breathing heavily.

Tiffah captions the cute family moment; "Just a matter of time before he can't carry us anyore😅"

As is common with the musician, he came bearing gifts that Tiffah tore into, anxious to see what dad brought for them.

"This one is for you I've gone to the mall to buy stuff."

Zari was not present during the visit as Diamond explained to Tiffah who enquired about her mother's whereabouts.

Diamond told her; "She is on the way. She is shooting, she is coming."

"How are you guys doing?"Nillan assures him everything is alright "fine".

Diamond adds, "Are you sure? you okay?"

Diamond has visited his children almost twice this year alone. He was there in August and October.

The impromptu visits always excite the internet because his life is gossip-worthy. For instance, his visit in October drew much condemnation and delight as well.

Diamond had shared a video of the two children questioning Zari about who broke up the family.

The video has since been pulled down following an uproar.

The music mogul has often been blasted for favouring Zari's children and spending quality time with them while neglecting the others.

It is speculated that Diamond is in South Africa yet again for the filming of the much anticipated Netflix series Young, Famous and African.

Ugandan socialite and mom of , Zari Hassan has no time for cyberbullies on her social media pages.
Latest
1 week ago

Rapper Diana Marua was in the news over the last couple of days after confessing in a video that she dated multiple men simultaneously.
Relationships
1 week ago
na Maureen Waruinge
Relationships
20 November 2022 - 10:42