Kanye tweeted an embarrassing photo of the new Twitter owner. 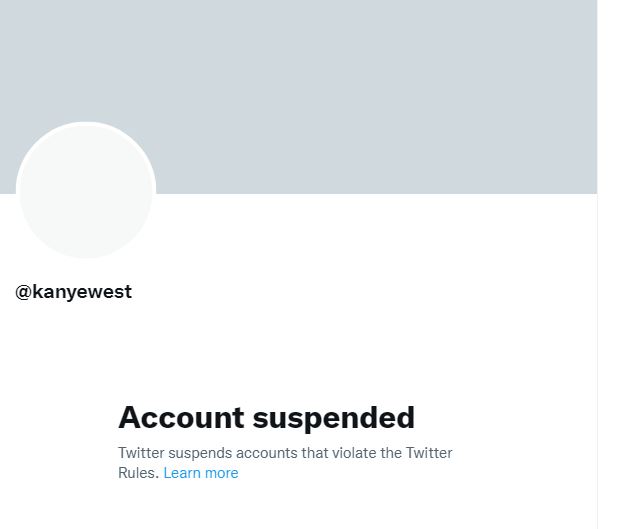 Kanye West's Twitter account has been deactivated.CEO Elon Musk has told netizens that his most recent tweets have landed him a block on the social media app.

In one, Kanye shared an unflattering photo of Musk that displeased the app owner.

Kanye tweeted a swastika and it remained live for hours before Twitter finally took it down.

But at that point, Kanye's account was still active.

Then Kanye tweeted an embarrassing photo of the new Twitter owner.

Then Kanye was suspended.

"I tried my best.

Despite that, he again violated our rule against incitement to violence.

"Just clarifying that his account is being suspended for incitement to violence, not an unflattering pic of me being hosed by Ari.

Frankly, I found those pics to be helpful motivation to lose weight!

Kanye had a following of close to 32 million fans.Kim and Kanye's divorce settlement was made public Thursday, December 1 and in documents seen online, the billionaire will be paying 200,000k for child support.

On November 29th that Kanye and Kim, along with their respective legal teams reached an official settlement on the custody of their four children and the division of properties.

Kim Kardashian filed for divorce in 2021, after eight years with West, who has legally changed his name to Ye
Latest
2 months ago

Kanye West exposes Kim Kardashian for allegedly cheating on him

On his Twitter Thursday night, Kanye claimed p0*n could have been the reason for the divorce.
Trending
2 months ago

Kanye West to run for Presidency in 2024

Kanye West, an American rapper, has proclaimed his intention to run for president in 2024.
Latest
2 months ago
na Maureen Waruinge
Trending
02 December 2022 - 09:54