Nairofey has now expressed regret about ignoring those red flags that now haunt her. 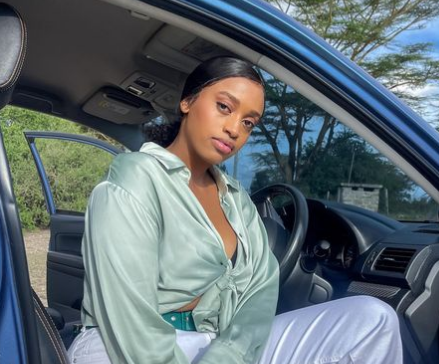 Content creator Nairofey has opened up about meeting her husband Duncan Macharia aka Yeforian, and the events surrounding their mysterious relationship.

Nairofey has been trending since Monday January 23, after going public about their failed marriage and social media life.

On Tuesday January 24, Nairofey once again took to social media to explain how she met him and the events leading to the breakdown of their marriage.

There are two clauses in her prenuptial agreement she noticed, felt something was off but ignored.

Nairofey has now expressed regret about ignoring those red flags that now haunt her.

she pressured him to move to Russia to be with him and work full time for their you tube channel in Russia. They were engaged and to Nairofey this made sense.

"I started pressuring him day in day out and he would tell me I cannot go because we were not married.

And you can only go to Russia if you are married to someone who lives in Russia apparently. I was so stupid to believe that

He came to Kenya where he hurriedly announced they need to tie the knot. "He made it a state of emergency"

Moments before saying I do, Nairofey was taken to lawyers where she was required to sign a prenup.

"whatever he did this day was the biggest form of betrayal ever.

I wish that day I could have turned around and said no. I didn't even know whats a prenup, and he was like I want us to sign some documents, its like a will to protect you and the kids we will have"

I remember reading a specific sentence. That's when I knew there is a problem somewhere"

The clause read: Any money earned by the name Nairofey from that time going forth even after separation he will always get half of my money .

She was hesitant but Duncan convinced her they would never breakup. She also recalled a second clause int he pre nup that said

"After our separation, he will only support the kids and not the mother "

Nairofey thought it a heartless request but she was scared and confused, signed the document to please her man, according to her explanation.

She explained that she didn't feel comfortable, but out of love signed the document. They got married at Sheria House.

This should have led to the couple leaving Kenya for Russia, but no such thing happened because Duncan kept avoiding the process to get the embassy documents for his wife.

Renowned media personality, Mwanaisha Chidzuga worked for various media houses before quitting in 2019 to pursue her private activities. Chidzuga is ...
Lifestyle
1 week ago

Politician Karen Nyamu is breathing fire after her fans asked her whether she had seen a video of DP Gachagua telling her baby daddy Samidoh to ...
Relationships
1 week ago

Following a glittering 17-year career, Kenya Sevens legend Collins Injera has hung up his boots. In a statement on Tuesday, the country's
Latest
1 week ago
na MAUREEN WARUINGE
Latest
24 January 2023 - 17:00