Obonyo was identified by the complainant and a number of key witnesses who placed him at the centre of the crime. 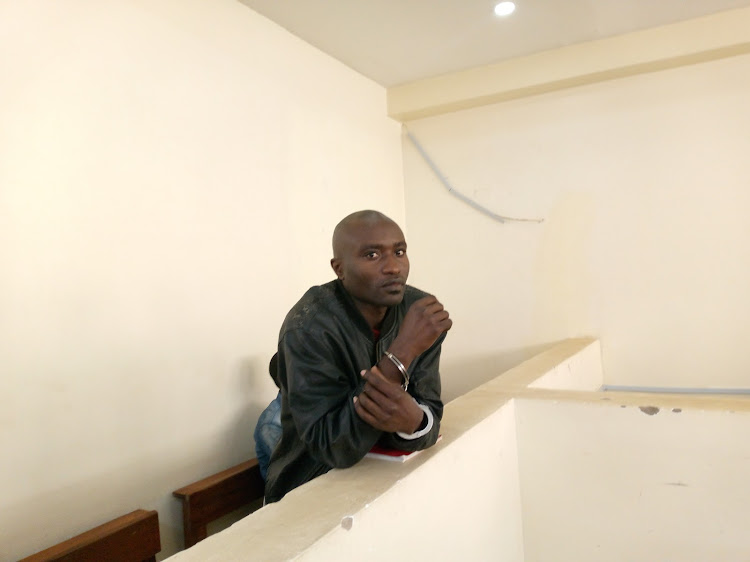 Benard Oduor Obonyo at the Kibera court during the sentencing.
Image: CLAUSE MASIKA

A man accused of using excessive force to rob an innocent guard after hitting him on his mouth, leaving him bleeding profusely, has been sentenced to death.

Benard Obonyo was sentenced on Thursday by Kibera senior principal magistrate Derrick Kuto after the prosecution proved the case against him.

He had been charged with using force to rob Nathan Wanyonyi of  Sh17,000 and NHIF and NSSF cards, among other personal items.

Kuto said Obonyo had showed no remorse even though he has had enough time to think through his actions.

Obonyo was identified by the complainant and a number of key witnesses who placed him at the centre of the crime.

"The offence led to the suffering of the victim who bled profusely and, on the question of identification, the court confirms that the accused person is the same person who committed the offence. He was also a tout at the Congo stage in Kawangware,”Kuto said.

He sentenced him to death and gave him 14 days to appeal.

“Robbery with violence is a serious offence that attracts a death penalty and in this circumstances, I have considered both the accused person's mitigations and I therefore sentence him to death. He has 14 days to appeal the same is he wishes,” Kuto said.

Prosecutor Allan Mogere also urged the court to give a tough sentenced to the accused person to deter other people from committing the said offence.

In his testimony, Wanyonyi said that he had just left his place of work, and upon arriving at the  Congo in Kawangware, he was accosted by two men who trailed him from behind.

“I never talked to them.  One of them then grabbed me from behind and gave me a blow on my mouth. I started bleeding profusely,” he said.

Wanyonyi said the accused person then tore his jacked and stole his items, including some cash.

“They tore my jacket and stole my NHIF card, NSSF card and Sh17, 000 that was inside it. By then I was writhing in pain,” he said.

The complainant said that a Good Samaritan took him to a private hospital before he was transferred to another hospital.

Other key witnesses who testified in the case was a medical expert and the investigating officer.

In his defence, Obonyo said he never committed the offence, arguing that he was a preacher and wanted to be preach the word of God once forgiven.

“I ask the court to give me another chance so that I preach the word of God," he said.