BBC presenter Rachael Bland’s heartbreaking final arrangements made for her family as she bravely faces death have been revealed by her tweet.

The mother-of-one, 40, who has terminal breast cancer, has wrapped 18 years worth of birthday presents for three-year-old son Freddie – but could struggle to finish a memoir written just for him.

She has also built up a collection of handwritten notebooks, perfume and other personal items so the little boy grows up knowing how his mummy wrote, smelled and sounded once she is gone.

And in order to not upset her husband Steve, she has set up a WhatsApp group with his sister detailing her wishes for their little boy as he grows up including not cutting his hair too short and ensuring he helps choose his school.

Rachael’s final plans have been revealed in a blog written last week – just before she learned she had days to live – but published for the first time today.

Her brave tweet yesterday announcing she has ‘only got days’ has sparked thousands of responses praising her inspirational dignity and bravery in the face of terminal illness. 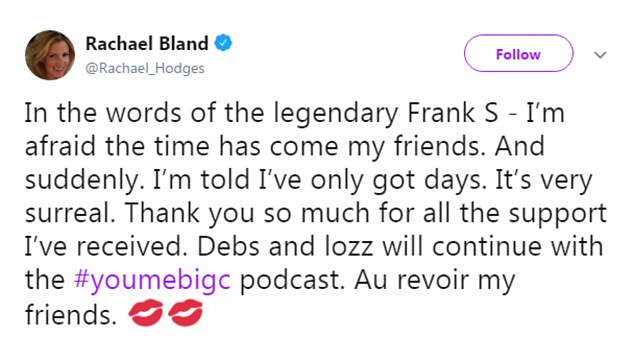 Yesterday the BBC broadcaster tweeted the news, sparking an outpouring of grief among friends and fans, and today she agreed to publish the plans she has made in the event of her death.

She wrote on HuffPost:

“I have a Whatsapp group with Steve’s sister where I send her things I want for Freddie and his future. The things that might overwhelm and upset Steve now but she will make sure happens.

Like not cutting his hair too short until he really insists, or my wish for him to go to the very best school and university possible, so long as that’s what he wants.I’m also planning and wrapping birthday presents which he can open between the ages of four and twenty one.

‘Personal effects like my notepads – so he can see what my writing was like. Or the perfume he helped pick out for me earlier this year so he’ll remember my smell. And his all-important box of newborn keepsakes’.”

Rachael is also writing a memoir for her son, called ‘For Freddie’, and faces a race against time to complete it.

She added: ‘It’s a collection of all those stories your parents tell you over the years from their point of view, mixed in with all the advice they give you.

‘I’d only known Steve for such a short period of time before we married – I feel there’s so much he needs to know from my point of view and in my voice. And I think I best get my personality down on paper’.

Rachael has been documenting her fight against the disease in a blog called Big C Little Me since she was diagnosed in November 2016.

The Welsh journalist also hosted a podcast series called You Me & The Big C where she discussed the highs and lows of battling the illness.

Former BBC colleague Susanna Reid was among those to show their sympathy, writing on Twitter: ‘Oh Rachael. You have so much courage.

‘You are loved beyond measure by people you haven’t even met because of the way you have dealt with this. My love to you and your family.’

Writing on Instagram and Twitter yesterday she said: ‘In the words of the legendary Frank Sinatra, I’m afraid to say the time has come my friends. And suddenly I’m told I’ve only got days, it’s all very surreal.’

Colleagues, friends and followers posted online to offer their support and express their sadness.

BBC Breakfast host Naga Munchetty said: ‘You have touched the lives of so many and inspired many more. Thinking of you and your loved ones.’

Her BBC colleague Eleanor Oldroyd posted: ‘Dear Rachael, you have lived a life to inspire millions.

Radio 5 colleague Richard Bacon also offered support on Twitter, writing: ‘Days. Devastating. Rachael I know saying I’m thinking of you (and our magnificent time together on air, especially all that late night fun) doesn’t change anything.

‘But I am and I’m so very sorry. Your podcast has helped change the way people talk about all this. You’re wonderful.’

And LBC presenter Iain Dale wrote: ‘You are in all our thoughts dearest Rachael. I’m sitting here preparing for my new show with a tear or two in my eye at the thought we will never hear your lovely voice on the radio again. Love from everyone at LBC.’ 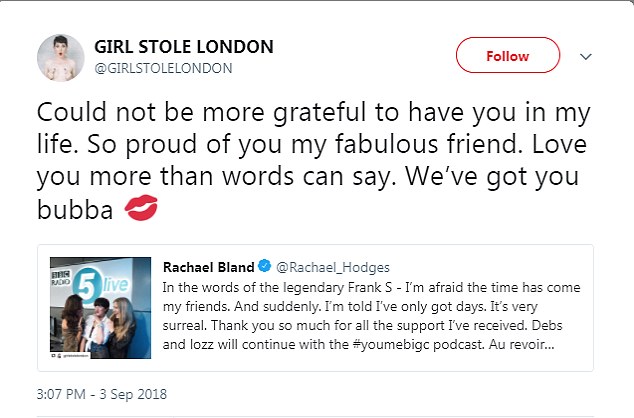 ‘Everyone talked about my promiscuous daughter. It was very embarrassing’Father narrates why he put all his daughter on contraceptives

Her tragic journey has been an inspiration to thousands of people.

Mrs Bland, a BBC news presenter of more than 15 years, has documented her fight with the disease with her blog Big C Little Me. Putting the Can into Cancer’ and a podcast called ‘You, Me & The Big C’.

Writing in her blog previously, Mrs Bland told of how she was with her son and his friends at an ice cream farm when she was given the earth-shattering news her cancer was terminal.

‘My heart raced as I answered it, knowing a phone call did not bode well.Then came the words “I am so sorry, it’s bad news. The biopsies have come back showing the same cancer is back and is in the skin”.

Describing the moment she broke the news to her family, Mrs Bland said: ‘I watched my little Freddie innocently playing away in a tyre in the barn and my heart broke for him.

“I scooped him up and dashed home and then had to break (her husband) Steve’s heart with the news that my cancer was now metastatic and therefore incurable.”

The news anchor had written that she felt she had become a ‘lab rat’ after starting a medical trial in a bid to buy her more time with her husband Steve and then two-year-old son Freddie.

Thousands of listeners tuned in to BBC Radio 5 Live to hear her weekly discussions with fellow patients Lauren Mahon and Deborah James on the highs and lows of living with cancer.