People using genes as an excuse not to lose weight is no longer valid after a study revealed that ones diet and not genes control how the body stores fat.

This comes at a time where many Kenyans are trying to lose weight due to the increase in the rate of obesity both in children and adults putting them at a risk of diseases such as diabetes and heart attack .According to Daily Mail More than two thirds of the processes that make people gain weight are controlled by their diet, while less than one in five is hereditary, according to research.

Scientists explored how the chemical reactions in a person’s gut – mainly caused by what they eat –  affect the way fat develops in their body.

Extending the study further they also pinpointed what causes fat to accumulate at the waist, which could help to combat type 2 diabetes.

The risk of developing the condition is known to be higher among people who have more visceral fat – abdominal fat which surrounds the vital organs.

Researchers from King’s College London say the findings could lead to personalised treatment for obesity and other chronic diseases.

They say understanding how different chemical reactions in the gut change the way the body handles fat means people could change their diet or medication to control their body weight.

One researcher said the study is ‘exciting work’ and ‘opens up many ways to use food as medicine.’

The study says just 17.9 per cent of gut processes which control fat storage are caused by hereditary factors, suggesting the vast majority of people can control their weight with their diet and lifestyle.

Meanwhile, 67.7 per cent of gut activity is controlled by the ‘environment’ in the gut – primarily the food and drink people consume.

Changes in this environment lead to changes in the way the body digests and stores fat, the researchers say.

The team’s findings come less than a week after experts warned nearly 25 per cent of the world’s population will be obese by 2045.

About 32 per cent of people in Britain are already obese, as well as 39 per cent of Americans – the world’s expanding waistline has been labelled a crisis.

Scientists behind this study at King’s College hope their findings will pave the way for personalised obesity treatments using people’s food to improve their health.

‘This opens up ways to use food as medicine’

Head of the King’s College London’s Twin Research Group, Professor Tim Spector said: ‘This exciting work in our twins shows the importance to our health and weight of the thousands of chemicals that gut microbes [bacteria] produce in response to food.

‘Knowing that they are largely controlled by what we eat rather than our genes is great news, and opens up many ways to use food as medicine.

‘In the future these chemicals could even be used in smart toilets or as smart toilet paper.’

How the research was carried out

The study was conducted by analysing the faeces of 500 pairs of twins to look at changes in their gut bacteria based on what they eat.

They analysed the stool samples to find out how changes in gut bacteria affected how the body deals with fat.

The analysis revealed biomarkers – a molecule, gene or characteristic – which caused fat to build up at the waist.

Obesity is a condition in which someone is very overweight and has a lot of body fat. 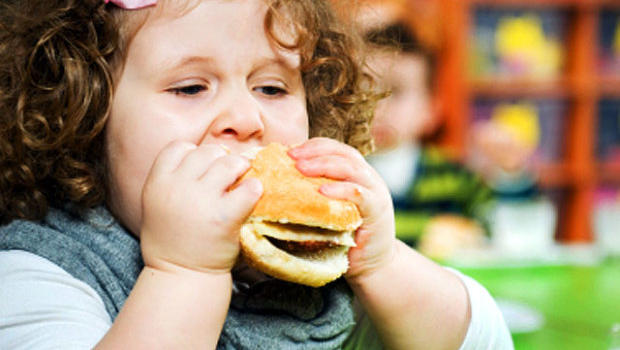 Obesity is a risk factor for diabetes, heart disease and stroke, some types of cancer, and numerous other serious health problems.

It is generally caused by people eating more calories than they burn off – particularly if their food is high in fat or sugar.

The best way to prevent or tackle obesity is to eat a healthy, balanced diet and to do regular exercise – the NHS recommends between two-and-a-half and five hours per week.

Calculating a person’s BMI involves measuring their height and weight and considering their age and gender.

By isolating these characteristics scientists hope they can change what happens in a person’s digestive system to reduce fat build up.

Chemicals in the gut revealed that less than a fifth of digestive processes could be attributed to hereditary traits, while over two thirds were caused by a person’s diet.

This means that important changes can be made to the way someone’s body distributes fat by changing their their diet or using drugs to alter the way their gut works.

The team’s findings were published in the journal Nature Genetics.

Lead investigator Dr Cristina Menni said: ‘This study has really accelerated our understanding of the interplay between what we eat, the way it is processed in the gut and the development of fat in the body, but also immunity and inflammation.

‘By analysing the faecal metabolome, we have been able to get a snapshot of both the health of the body and the complex processes taking place in the gut.’

More than 600,000 people were admitted to hospital in the UK last year because of problems linked to obesity.

Being severely overweight increases a person’s risk of heart disease, stroke and cancer and the NHS spends billions of pounds every year treating obese people.

Dr Jonas Zierer, first author of the King’s College study added: ‘This new knowledge means we can alter the gut environment and confront the challenge of obesity from a new angle that is related to modifiable factors such as diet and the microbes in the gut.

‘This is exciting, because unlike our genes and our innate risk to develop fat around the belly, the gut microbes can be modified with probiotics, with drugs or with high fibre diets.’

An NHS boss has sparked outrage after saying men die younger because “they are nagged to death” by their wives.

The remark was made just days after experts said life expectancy improvements are grinding to a halt because of the ailing NHS.

They noted how boys born today can now expect to live for 79.2 years, where as girls will be expected to reach 82.9.

He told a think-tank meeting: “Usually the blokes die off earlier because they’re nagged to death by the other half.”

In attendance for the “shocking” comment were Health Secretary Jeremy Hunt and Simon Stevens, chief executive of NHS England.

Delegates described the comment made by Sir Morris, who reportedly earns £220,000 a year – as “patronising”.

Sir Morris, knighted in 2015, has previously been named the country’s top health chief executive for his leadership qualities, The Sun reports.

He is also one of the longest-serving bosses in the health service, taking up the head role at the trust in 1989.

The 61-year-old apologised to the newspaper. He said: “I made a comment that I realised right away was completely inappropriate. I would like to apologise unreservedly for any offence that it caused.”

But Jon Rouse, from the Greater Manchester Health and Social Care Partnership, said on Twitter that “dinosaurs still roam in East Berkshire”.

Lizzy Dobres, from the UK Council for Psychotherapy, said the comment showed there was still ‘such a long way to go’.

Others branded the apology as meaningless. Andrew McCracken, from National Voices, said it was “rubbish”.