Sportsmen and women are celebrated for always representing the Country, but their efforts as parents always go unnoticed despite the hard work they put in.

It is hard training and being a parent at the same time but these sportsmen and women have proven that nothing is impossible.

He is arguably one of the best rugby players Kenya has ever produced but besides that he is a doting dad to a daughter who is 7 and a son who is 3.

From his social media posts, his daughter loves cooking and dreams of being a chef.

The damsel, who is loved for her energy on the track, is a first time mum. Her daughter Princess Kimberley Cherop was born during Easter.

“The best gift from God this Easter. Welcome to the world Princess Kimberly Cherop. To my lovely wife Cherono Ngetich Mercy, congratulations.”

Many know him for his long strides and exemplary performance on the track but behind the scenes he is a doting father of two. His daughter has taken up after him and joins him while he is training. She just might be the next big thing in the sports world.

Despite being caught up in a love triangle, Kiprop still remains a doting father to his two kids.

He is father two a son and a daughter and they are as beautiful as their mother.

Known to many as the ‘You Tube man’, Yego is a doting father of two with his youngest being a few months old.

Hopefully his son will pick up after him and join sports, we would love to see him do that.

He is among the best celebrated footballers  in Kenya, who is married to media personality Brenda Wanga. They have two children.

Well, his daughter has shown interest in playing football and when she does play, her age mates see dust literally.

His son is also at an age where he can play and we can only wait and see how he turns out.

Next in line was world record holder Beatrice Chepkoech who brought home World u20 and Africa Olympic Games champion Fancy Cherono to a clean sweep in the 3,000m steeplechase final.

Elijah Manangoi confirmed he is the true championship runner now and in the future as he led training mate Timothy Cheruiyot homein a 1-2 finish in the 1500m final.

Zakayo Pingua added the senior men’s 5000m title to his world u18 and World U-18 titles, The Star reports.

As the track hosted a packed up schedule, former world javelin champion Julius Yego delivered the gold medal in his specialty.

The 4x400m women’s team settled for bronze behind the hosts with their male counterparts closing the day with another hoisting of the flag.

The trio observed that theirs was a perfectly executed game plan which work as per plan.

“We had promised Kenyans that we would deliver and we are happy we did it,” said Chepkoech. “We had planned very well and my focus now shifts to the Continental Cup.”

“It is my hope that the performances of this season will open the door for better things in the future with the World Championships and the Olympics Games just around the corner.”

Cherono said her immediate target is confirming her supremacy to the world at the Olympic Youth Games in Argentina next month. “I am very happy with my bronze medal. I will now go to Argentina and fight to add the Olympic Games title in September,” she said.

“I am very happy with my performance today and more so to deliver a medal,” said the Commonwealth Games bronze medallist.

“The race is not such a favourite but I have made it my task to ensure it is embraced just like the rest of the events. It is such a technical event with so many challenges but I have decided that I am not going to give up.”

Wanjiru said she missed the company of teammate Emily Ngii who was admitted in hospital for two days with stomach problems and was only discharged hours after race.

A day after Gospel singer Daddy Owen and his wife welcomed a baby, another Kenyan celebrity is sharing the same joy.

Javelin champion Julius Yego’s wife has given birth to a baby boy. The new-born is named Finn Kigen Lagat.

It appears that the two men’s wives were deliverying their babies at the same time as Julius Yego posted a photo with Daddy Owen in the corridors of the hospital.

He also indicated Daddy Owen’s wife was in labour.

Daddy Owen it was nice meeting you man, congrats and goodluck to your wife on the labor ward

This is Julius Yego’s second child.

Congratulations to the couple on this new addition. 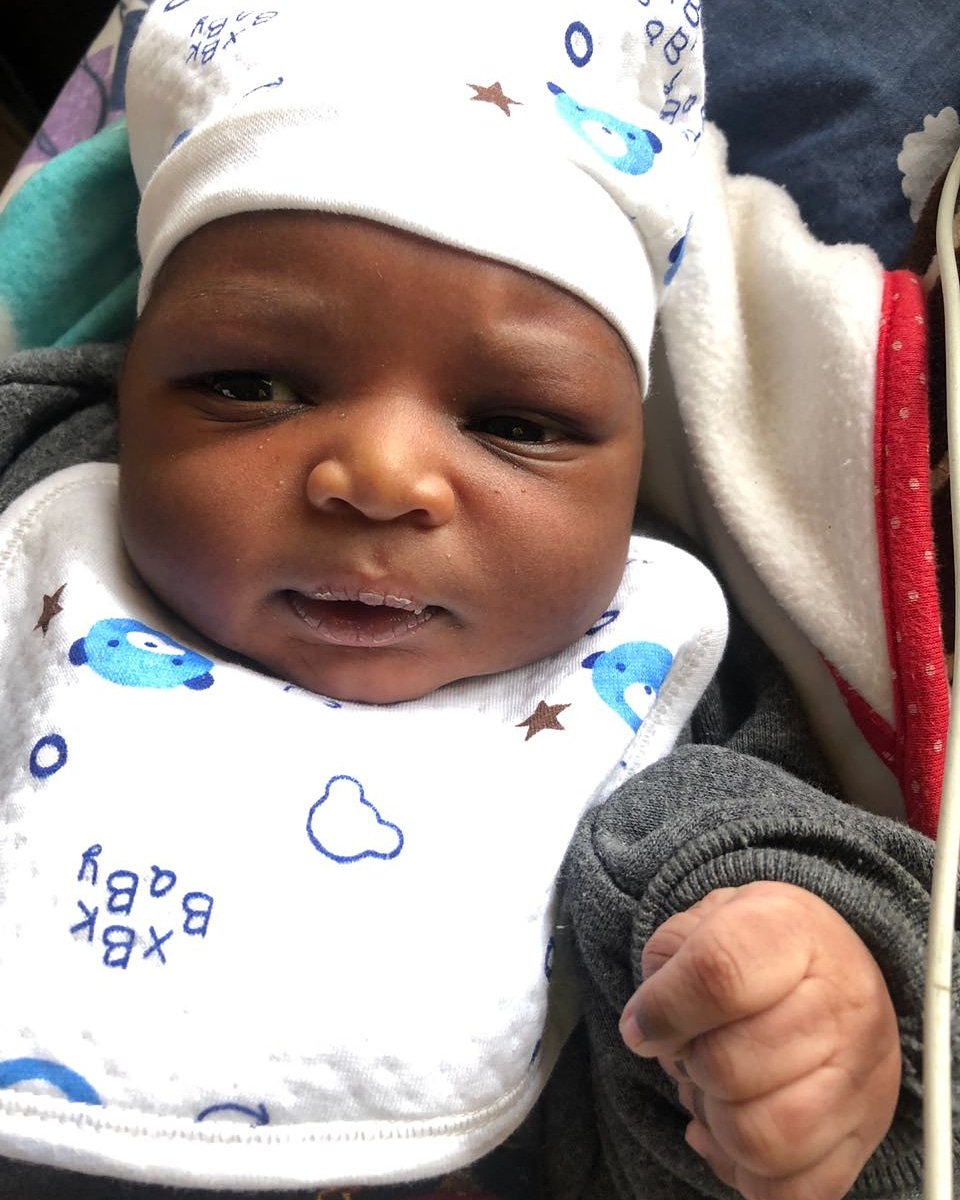 Back in June 2017, World Javelin champion Julius Yego let the world know that his grandmother had passed on.

His granny went to be with the angels at the age of 93, and his followers noted how she had loved a full life.

Julius Yego and his granny

Sadly,  Yego has lost his only surviving grandparent. His grandfather passed on, and the world champion has penned down a moving message to his late grandpa.

Sometimes life can be that stressful ! Within a span of 1year we lost these great pillars of our family ! But it’s ok we thanked you for the great guidance and laughter we had together our grannies we say BIG thank you
We will miss you forever but the gap will be hard to be filled though
Say hi to gugu babu till we meet again

Still can’t believe you no more Babu ! It is so painful it was just yesterday we spoke together but now it’s different story but go rest well say hi to shosh

Eva Mutua …God give you grace and strength always. Loss is hard but you learn to live without them to be able to carry on. I pray for your peace.

They say an apple never falls far from the tree and I agree with that. Have you seen children of famous celebrities who look like their parents? Well, we have Deputy President William Ruto’s children who bear a freakish resemblance to him, Wahu’s eldest daughter, who looks exactly like her, Lulu Hassan’s sons who are a photocopy of her etc.

Well, award-winning athlete Julius Yego aka Mr. YouTube recently introduced his son to the online community and oh my! Yego Jnr bears a striking resemblance to his father.

Check out photos of Julius Yego’s son everyone is talking about.

Yego’s followers can’t keep calm. They were mesmerized by Yego’s son’s looks and here is what some had to say;

Peter: I can see a future champion getting tips from the best.

Julius Yego brought Kenya’s gold medal standing to 5 after his impressive 92.72m throw at the Beijing World Championships. Yego erased his previous record at 91.39m which he had set arthe IAAF Diamond League two months ago.

Yego’s win marks the world’s best throw of all time since a record set in 2001 and in 1996. Trust Kenyans on twitter to make a hilarious trend out of Yego’s win titled ThingsYegoCanThrow.

KOT are addressing all matters corruption, pastors of doom, tribalism, EPL…if only solving such issues plaguing Kenya was that easy.

Check out the hilarious tweets

#ThingsYegoCanThrow corrupt KE politicians to the highest mountain,never to be seen.

#ThingsYegoCanThrow – When he gets old and refuses to accept. Hahaha pic.twitter.com/CFyxAWVceI

#ThingsYegoCanThrow anyone who spells hi as ‘hae’ back to kindergarten.

#ThingsYegoCanThrow his name into the Guinness world book of record. watch this space

This made my day… #ThingsYegoCanThrow Arsenal to the top of epl.. Stone throwing shemeji fans to Beijing

Kenya’s Julius Yego won world javelin gold with the third longest throw of all time in Beijing on Wednesday.

Defending champion Vitezslav Vesely of the Czech Republic could only finish eighth with a best of 83.13m.

Javelin boasted the strongest field of any discipline at the Sainsbury’s Birmingham Grand Prix, but few could have predicted the drama that would ensue in that event at the IAAF Diamond League meeting on Sunday .

Kenya’s Julius Yego took an early lead with 85.95m in the first round but Trinidad and Tobago’s Olympic champion Keshorn Walcott moved into pole position with a national record of 86.43m in round three.

But Walcott’s lead lasted just a matter of minutes as Yego threw 10 centimetres farther with the next throw of the competition.

World champion Vitezslav Vesely just made it past the halfway cut of the competition, throwing 79.55m in round three after two fouls to sit in eighth place. The world champion remained in that position until his last throw of the day when he unleashed a season’s best of 88.18m to move straight into first place.

Everyone else was unable to respond to the Czech athlete with their final throws until Yego stepped on to the runway.

He sent his javelin high into the air and it landed well beyond Vesely’s mark but was initially ruled to have fallen outside the sector. It was up for debate, though, as the sector lines hadn’t been extended beyond 87 metres.

The throw was measured anyway – 91.39m for the record – but after close examination the judges said it was still outside the sector.

Twenty minutes after the meeting ended, with the stands now completely empty, the officials reversed their decision and awarded Yego the victory with his 91.39m throw.

Confirmed as the winning mark, Yego’s performance is not only an African record and IAAF Diamond League record, but it was also the best throw in the world since 2006.

Julius Yego who trained himself via YouTube is the only Kenyan representative for the sport at the 2015 IAAF World Challenge event in Ostrava.

He has surpassed his very own record of 85.40 metres.

Meanwhile David Rudisha pulled out of the 200 metres race after getting a thigh injury on his right leg.

Its just a thigh muscle spasm not very serious problem. With few days of good care i hope to be back onto training. https://t.co/SZ2o4DUG3O

Hope that @rudishadavid is ok. He pulled up, holding his leg during the @ZlataTretra 600m. pic.twitter.com/yXwhXL1Nvm