More and more visually impaired Kenyans are venturing into music, sports and other careers. and proving disability is not inability.

Crystal is among Kenyans who have overcome their impairment to make their dreams come true.

Crystal who lost her sight due to Glaucoma was recently featured in Sauti Sol’s new jam ‘Extravaganza’ and Kenyans are impressed.

Other songs she has done include the State of Love.

Exclusive: Reuben Kigame narrates how he found love again after an accident claimed his first wife

Reuben who is a celebrated gospel artiste in Kenya turned blind at age 3.

He is known for songs such as Enda Nasi, Huniachi, Sina Mungu Mwingine among others.

Speaking about it in a past interview he says,

I remember one evening after mum blessed our dinner at home I reached out for the plate and missed it.

This shocked me and everyone who was present at the dinner table.

Watch his music video below

Henry who is a celebrated Paralympic athlete lost his sight more 24 years ago after a stroke.

Speaking about his experience in a past interview Henry says,

When I lost my sight in 1995,I was so dissappointed and I thought I would never happen.

The celebrated Paralympic runs the Henry Wanyoike Foundation which aims at improving the lives of people living with visual impairment.

‘Should the other woman meet the wife?’ Maina and Kingangi discuss

Mary is among the pioneers of Kenya’s gospel music. She is known for songs as Adamu na Eva and Sodom na Gomora, among others.

Speaking about how she lost her sight with a past interview with the Standard, Mary says,

When I was born at first everything about me seemed normal.My parents had no idea what would befall me in the few months to come.

It was not until I was five months that they realized I was blind.Like many parents concerned parents they did their best to ensure that I would be able to see again by taking me to various medical institutions.

This include the then famous King George V1  hospital now Kenyatta National Hospital in vain.

Dennis Kariuki famously known as Denno became a sensation after collaborating with Daddy Owen to create the song ‘Mbona’.

Denno who is visually impaired has gone ahead to sing alongside Bahati.

No one ever pictures living their whole life with disability but some Kenyans have turned their lives around by accepting their situation.

Unlike back in the day when people living with disabilities were shunned and ridiculed, society is slowly accepting them and giving them equal opportunities just like everyone else.

Henry Wanyoike, who is a blind athlete, has beaten the odds to go ahead and win in different races both locally and internationally.

Wanyoike lost his sight after suffering a stroke on May 1, 1995. He says

“I went to bed a normal person, the following day I found myself in darkness.”

That night he lost 95% of his vision, and lost the rest gradually over the next few years. He was in despair. “I thought my life had come to an end.”

Denno came into the limelight after he collaborated with gospel artiste Daddy Owen to create the song ‘Mbona’ and since then he has gone ahead to produce another song with Bahati dubbed ‘Story Yangu’.

He is a true definition of mwanaume ni effort

Euphoric lost the ability to use his lower body after being affected by Polio, but he has made a name for himself in the entertainment industry by being among the most sought after spin masters.

Mary has been in the entertainment industry for more than two decades, producing uplifting gospel songs that get everyone to they stamp their feet whenever her music is played.

Father to gospel artiste Emmy Kosgei has beaten the odds and created a name for himself as a pastor despite being physically challenged.

While some people take advantage of their physical disabilities to beg and con people Jackson is proving that we are all blessed in different ways. 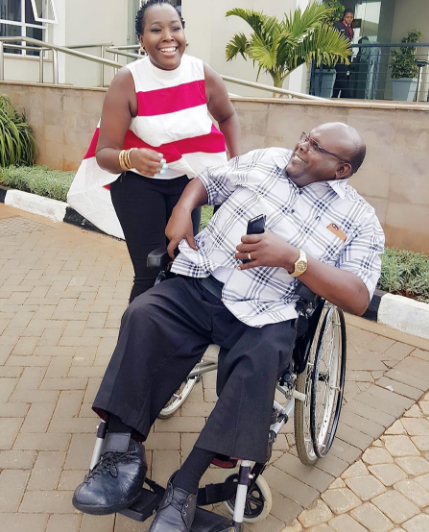 Migori Women Rep Ghati lost the use of her legs after being an an accident in 2014 only an year after being sworn in.

Disability is frowned upon in the African setting but these celebrities have broken the stigmatization by talking about it in public.

Hard as it may be, they have opened about having disabled children or siblings some even parents, narrating how the journey has been.

Media personality Anne Ngugi has a daughter who is battling hydrocephalus. Speaking about it she says

“She understands she is different from other kids. When we go out to mentor people, she is able to express herself very well. As a mother, my dream is to see her stand strong on her own, even when I am not there, and never allow anyone to point fingers at her, telling her she is different. Raising a child with special needs has not been easy for Anne, but she does not complain about it.”

“Sometimes you go to places with her and that is when I feel the weight that she is different from others but for her, Angel has developed a thick skin and, therefore, she copes. I have always accepted because I know there is always a reason.

You have to accept the fact that your child is special and start looking for solutions, as well as try so hard to love that child because no one will love your child more than you.”

Yvonne recently lost her brother who was deafblind almost all his life. In a previous interview she opened up about it saying that

“In the 60s, while expectant, my mother contracted German Measles. It has no symptoms. By the time she was giving birth to her first born son, there were complications. Mental retardation, and deafblindness started to set in.

She tried everything, no door was unknocked, multiple surgeries, consultations. She talked to every doctor in the country. All of them, including, the professors, told her they had travelled far and wide and had NEVER seen anyone like my brother.

That he would not live beyond his 5th birthday. Or his 10th. Nor his 12th. Albert Okwara is still here! 50 years later! What a journey it has been.”

“Friends have fallen along the way, those that could make the choice did so and exited our lives. Called it a curse. To the entire community! I won’t name names but he knows himself!

The world of disability is a lonely one! The road has been lined with tears, pain, dashed hopes. But it has also had wonderful lessons that have made me who I am today! Let me explain, Albert is deafblind. He does not see, speak or hear.”

Female artiste Emmy Kosgei is another Kenyan celebrity who has openly talked about having a family member battling disability.

Emmy’s dad is bound to a wheel chair after his limbs were affected by polio years ago.In an earlier post the artiste expressed her amazement at the fact that her mum over looked her dad’s disability .

“My mum is my inspiration, I have grown to see my mum achieve much having brought us up having been married to my dad who is physically challenged.

I am still amazed at how she was able to overlook my dad’s physical disabilities , and marry him  even with the pressure from the society and his family on what she had seen in such a man.”

“She  married him and she has stood by him even as he studied at the university, we were also in school but she has been there through it all”

Deep details of Jacque Maribe’s life in the cell

He is known for his love for athletics, having ran in so many races but it has not been easy for him.

Speaking about the day he lost his sight, Henry recollects how in March 1995 while he was having breakfast numbness struck him.

One day in March 1995, Henry was having breakfast when a piece of ugali he was holding suddenly fell off his left hand, followed by crippling numbness on the same hand.

“I was confused and could only manage a stammer. I was scared.”

At the nearby Thogoto Mission Hospital, doctors could not find anything wrong with Henry. Doctors at the Kenyatta National Hospital later discovered that Henry had suffered a stroke.

‘Deep down, I know I am totally and completely innocent over the allegations leveled against me’ Jowie states in his affidavit

That was the beginning of his ordeal. One day, Henry woke up to his mother’s loud shouts. She was wondering why he had overslept, forgetting to milk the cows. Henry remembers:

“We argued with mum. I tried to tell her it was still dark while she insisted that the sun was up. I reached for the light switch but couldn’t see anything and concluded there was a power blackout. Mum thought I was just being lazy.”

Soon, his mother realized that her son was not putting on a show and they went back to Thogoto Hospital.

Several tests revealed that he had lost his sight and that nothing could be done to reverse the condition. At 21, Henry had become blind.

“I got into a depression,” says Henry.

5 .DJ Pinye
In Daddy Owen’s music video ‘Mbona’ in collabo with Denno, Pinye talks about having a brother who is epileptic.
The next time you want to give up just think about what the people above and a million others go through everyday, and be encouraged.
Read more
This Week's Winners