Women start turning into their mothers at the age of just 33 – a year before men start behaving like their fathers, according to new research.

Motherhood is the thing that triggers personality changes in women the most, followed by physical signs of ageing.

More than half of women polled admitted they stopped rebelling against their mothers once they hit their thirties and started behaving like them instead.

Keira Knightley, 33, is the age that most women polled confessed to aspiring to be like their mothers. The actress’s mother Sharman Macdonald is 68.

Men were also surveyed and revealed they start turning into their fathers at 34 – the same age as Prince Harry, whose father Charles is 70.

Women said classic signs they were starting to behave like their mothers were watching the same TV shows as them, taking up the same hobbies and using the same expressions.

Men said they started acting like their fathers after becoming fathers themselves.

Others said showing signs of middle age, such as balding and weight gain, switching lights off in empty rooms, and switching from Radio 1 to Radio 2, were all indicators of them turning into their fathers.

They also admitted adopting the same political opinions as them.

Describing the results from the 2,000 participants, he said: ‘We all turn into our parents at some point in our lives – and that is something to be celebrated. They are the most wonderful people in the world.

‘Becoming parents is the main trigger and lifestyle factors are also important.

‘Both sexes said the physical signs of middle age were also a key factor.

‘It is an inevitable part of ageing but a process lots of people want to put off for as long as possible.

‘It is one of the reasons why the average age of first-time cosmetic surgery is coming down for both sexes.

‘For women, it is now 37 and for men it is 43. More people are trying to delay this onset of middle age to improve their appearance and levels of self-confidence.’

A man is speaking out for the first time to call for his killer father to never be released from prison after he was jailed for murdering his own daughter when she fell pregnant with his baby.

Shane Brown, 27, from Chorley, Lancashire, was 12 when his dad Sean Brown, then 35, killed his 14-year-old sister Carry-Ann Brown, and has vowed to ‘never forgive’ the ‘evil monster’.

Carry-Ann, who had a mental age of seven, had been removed from his care after authorities discovered she’d been impregnated. The baby was aborted on the orders of a high court judge, and DNA tests were ordered.

Knowing the results would reveal him as the father, Brown lured Carry-Ann away from foster carers and drugged her with sleeping tablets before speeding down the M6 motorway in Cumbria, deliberately smashing through a fence and rolling down a steep embankment in an attempt to kill them both.

Carry-Ann suffered head injuries and died in hospital five days later. Brown pleaded guilty to murder and having unlawful sexual intercourse with his daughter at Preston Crown Court and was jailed for life in 2004.

But Shane – now a dad-of-two himself – is fearful of his father’s release, due in 2023, and thinks he should never be allowed out of prison. 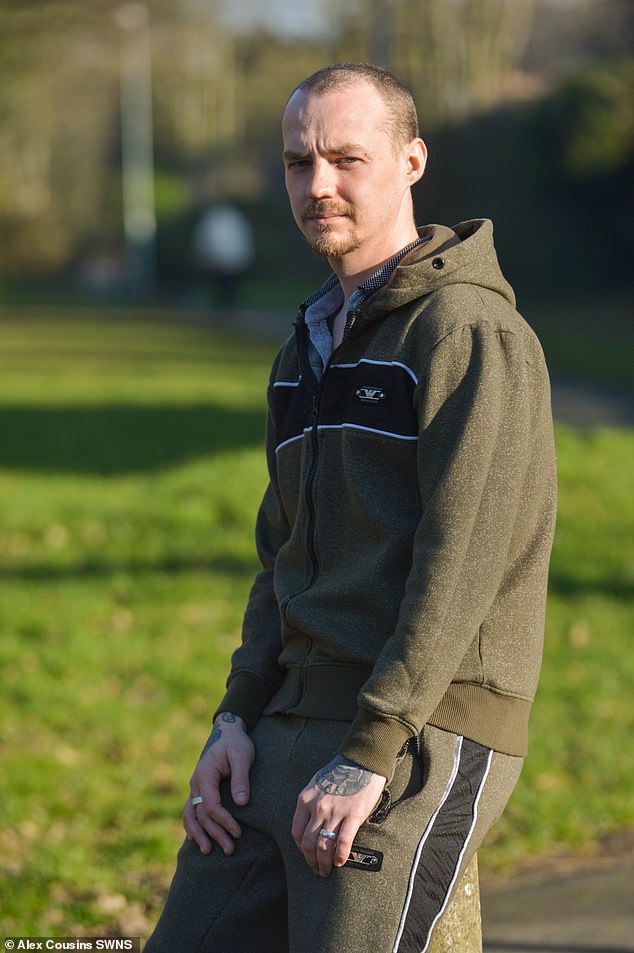 Talking about Brown, Shane said: ‘He is an evil monster and should never see the light of day again. What he did to my sister is completely unforgivable.

The full-time dad said: ‘I’ll never forgive my father for what he did. He completely destroyed our family.

‘He is an evil monster and should never see the light of day again. What he did to my sister is completely unforgivable.

‘He took her life – so he should never get to live his on the outside world.’

As she stood up to get off the bus a stop early on her way home from school, 11-year-old Ursula Keogh handed a friend a handwritten note in an envelope which read ‘Do not open until after 6pm’.

By the time the her friend had dutifully followed those instructions, Ursula was dead, having jumped 30 feet from a bridge into a rocky river below.

In the note, the Yorkshire schoolgirl wrote that she had ‘given up’ and stopped fighting’.

The heartbreaking revelation – along with news that young Ursula had been planning to take her own life for several months – was revealed at her inquest in Bradford yesterday.

Senior coroner Martin Fleming ruled she had taken her own life in a pre-planned bid to jump from the bridge, adding Ursula’s resolution in her actions was ‘very difficult to reconcile in the case of such a little girl.’

The inquest heard that Ursula Keogh, who lived in Halifax, died of a head injury at around 6.55pm on January 22, sustained from falling from a height.

The court heard she was a ‘troubled young girl’ who was ‘struggling with the stresses and strains’ of a breakdown of marriage between her parents.

The Lightcliffe Academy pupil was reported missing in January this year, after her mother received a text which read: ‘I love you, so so sorry’.

On the day of her death Ursula went to school as normal, but her mother Nicola Harlow revealed in hindsight that she had been unusually affectionate, turning to say ‘I love you’ and giving her a kiss as she left for the day.

Writer Nicola Harlow told her daughter’s inquest that it was ‘strange’ behaviour from Ursula. At 3.30pm she texted her mum again, with the message : ‘I love you, so so sorry’.

When her mum rang her phone 14 minutes later it was picked up by a stranger who had just found it lying on the ground at the top of the bridge, close to a floral memorial to a previous victim.

Several hours later her body was recovered from the River Calder at Paris Gates in Halifax.

Teachers reported her behaviour as normal on the day she went missing – but after handing her friend the pre-written suicide note she got off the bus one stop early to walk to the bridge alone.

Until recently not many people knew who Auma Obama was.  Not until she received her brother U.S president Barack Obama at the JKIA during his recent visit to Kenya.

She also introduced her brother before his public address at the Kasarani indoor arena: an opportunity many would have wanted to have. Did I also mention that she got to ride inside “the beast” with him?

Enough of that, here are photos of her and her daugthter Akinyi Manners. Their fashion sense is really on point. As they say “Ujaluo itawamaliza!”

A popular city MP’s daughter is said to have been ditched by her boyfriend for demanding shopping worth Sh300,000. According to her close friend, the ‘spoilt’ kid in her early 20s is said to have made the demand to her ‘not so rich’ boyfriend to fly to Dubai to shop for her.

“Almost all his pals shop overseas because they are filthy rich. So she recently made a demand to him that he must also do the same and buy her expensive clothes and shoes. But since he is not yet in the same league with his friends, he felt no need to continue having her as his girlfriend,” said the source.

A mother and her daughter are being held at Othaya Police station, Nyeri County over allegations of murder of their eight-month –old girl toddler.

The two were picked by police at their home in Kihungi village last night; Othaya after the child went missing since Thursday last week.

And after interrogation, the daughter Agnes Wangui showed police a shallow grave at the home compound where the child is alleged to have been buried in a shallow grave.

The baby was third born of Wangui.

The other two children were away from home for December holidays.

Reuben Kogi, a brother of Wangui told media at the home today that his mother Genelica Wanjiku and sister Wangui have been living abnormal life in the recent past before the child went missing.

He said it seems they were possessed by demons.

The child was buried near the grave of another family member Francis Muchiri who was their father.

A neigbour John Maina said that the two women have been behaving abnormally and strangely since last week since they have been picking tea after 6p.m and also picking coffee on Sundays and taking it to the nearest factory although the factory is normally closed on Sundays.

Area police boss George Ouko said they have started investigations over the matter and are seeking a court order in order to exhume the body.

A 12 – year- old girl is recuperating at the Mtito Andei sub – district hospital after she was burned by her mother for allegedly stealing Sh 20.

According to the hospital’s Medical Superintendent Dr.Kevin Maweu the girl was admitted on Saturday after suffering 15 percent of second degree burns on her chest, abdomen and thighs.

Maweu said the girl was in stable condition but revealed that plans were under way to transfer her to Makindu Level Four Hospital for specialized treatment.

“Since admission the girl has greatly improved but the burns require grafting and that is why taking her to Makindu hospital was necessary,” said Dr.Maweu.

Speaking from her hospital bed, the girl said her mother, Stella Mwikali tied her hands with a rope, doused her in paraffin and set her on fire for allegedly stealing Sh 20 from her purse at their home in Misuuni Village Makueni county.

“My mother sent me to her bedroom to pick money from her purse, I only found Sh 500 and brought it to her but she accused me of stealing Sh 20 that she said she had put together with the Sh 500,”said the girl.

The minor said she had not stolen the money. Her screams attracted her siblings and neighbours who put out the fire and took her to the hospital.

The mother is said to have fled immediately after the incident and is being sought by police. The girl’s aunt Nthenya Musyoka alleged that the mother has on several occasions abused her children .

“This is not the first time for her to abuse her children,” she said,.

Makueni deputy Governor Adelina Mwau visited the girl at the hospital condemned the act and called for investigations into the matter.

“It is quite disheartening when mothers who are supposed to be care givers abuse their own children, such violence should be condemned in the strongest terms possible,” she said.

A senior politician in the august house known for his campaign against nepotism the target of jibes from the administrator of the parliament.

This is because he used his influence to land his daughter a job at the august house.

The ambitious leader married off his daughter in a colourful ceremony, but the marriage collapsed and the girl went back home to her parents.

But even as he is accused of preaching water and drinking wine, his wife can no longer stomach his womanising and is in talks with lawyers to end their marriage of many years.

A former official of the Mumias sugar company is reported to be undergoing a tormenting period in his life after losing millions to witchdoctors.

The youthful boss attempted to seek services of black magic to save his career in the midst of mounting claims of his underhand dealings in the company.

His efforts however failed after paying the money to the witchdoctor.

He is now seeking police assistance to recover his money from the west african conmen.