Sauti Sol’s Chimano has opened up about his life being socially awkward.

Speaking in a recent episode of Engage Talk, Chimano recounted his early childhood saying he realised that social interactions were not his cup of tea.

“Growing up I considered myself a very awkward child but maybe I’m being too hard on myself so I will try and explain.

“I used to find it so laborious to make friends. It was an activity that I honestly thought I could do without,” he started.”

Chimano went through four different schools which made it difficult for him to retain friends.

He says his Christian parents tried to get the best education for him and all his other siblings.

He did well and was enrolled at Kakamega High School but was transferred to Upper Hill where he met the rest of his band members Bien Barasa, Savara Mudigi and Polycarp Otieno.

“But in high school, I was still a very subdued child,” he described.

Despite getting into the University of Nairobi to study journalism, Chimano didn’t feel as though he was fulfilling his purpose in life until his music career started picking up.

He says his sense of fashion by helping his mother pick out clothes to wear to church and work.

“Being on stage is such an amazing feeling. When I am dressed in my rarely subtle attire and singing, it feels like a different sort of energy. It brings me fulfillment,” Chimano explained.

He described his sense of fashion as a challenge to toxic masculinity.

“I’m proud of the man that I’m becoming. A man who listens, a man who strives to understand the world around him in most cases, who cherishes and loves to be there for his loved ones who have played a tremendous role in his life,” he said.

He concluded by thanking other band members for always standing by him and understanding him better.

Chimano together with his fellow stars from Sauti Sol will tonight launch their album Midnight Train in the biggest online showcase in Africa.

We take a look at celebs who have either joined the world as single men, or are yet to hook up nor get married. Who would you consider to date/marry?.

Grandson to former President Mwai Kibaki, Sean is among the most eligible bachelors not only in Africa but also in Kenya.

With his melodious tunes, a body worth being on the cover of magazines, who wouldn’t want such a man for a husband.

It’s better to get a handsome man and get beautiful babies whom you will happily look at than marry an ‘ugly” guy and end up with the double tragedy of being a single mother to not so appealing kids, after all even ugly guys cheat.

Jux is currently dating a ‘mzungu’ after breaking up with Tanzanian star Vanessa Mdee.

‘He became very hostile,’ Pascal Tokodi on being conned by a house agent

For a man earning a six salary figure he is bound to attract lots of women but he has not found the ‘One’.

He may be in the limelight locally and internationally, but Savara who is a member of Sauti Sol band, has not found the right woman to convince him put a ring on it.

So ladies go ahead and try your luck.

His voice alone is enough to woo a woman.

The member of Sauti Sol boys band is still single and up for grabs,so ladies be woke.

Nviiri the storyteller is also among Kenya’s most eligible bachelors. His talent and music skills is a plus given that no woman loves a dumb man for a husband.

He is all shades of perfect, Tall, well built, handsome and smart. What more can a woman ask for?

Days after Sauti Sol’s guitarist Polycarp Otieno alias Fancy Fingers tied the knot Kaligraph has showed his displeasure for being left out in the line up.

Well among those who commented is none other than the OG himself and going by his comment he is not thrilled at all.He wrote

Below are some of the comments from the fans

Weddings come and go and just the fact that Kaligraph was not in the guest list does not necessarily mean that Fancy Fingers does not see him as a friend.

Sauti Sol, our favourite afro-pop band is not only known for their awesome music but also their style.

They’ve had successful tours in Africa and Europe, topped Kenyan charts and gained international attention with shows in Europe and the US.

They are always mesmerizing us with their new and fresh looks from time to time.

And always dress to impress and here are some of the looks they’ve been spotted in.

Today talented Sauti Sol member Chimano celebrates his birthday as he turns 31, a blessing most people have not been able to receive.

“I’m blessed to have the life that I have, blessed to live my dreams and still keep dreaming and bringing them to fruition. Blessed that I have the confidence(which has taken a while to grow) to stand up for myself and respect the individual that I’ve become! The stars keep aligning. 31 isn’t a bad look on me…. #happiness #soulstyleattitude😎😎”

Is a man obligated to feed the kids of a single mother he is dating if they are not married?

As Chimano celebrates his birthday here is the sweet message his band member Bien wrote to him complimenting his sense of fashion which he thinks is dope.

Happy birthday to one of my best friends in the world. I’m so glad to be part of your journey. Looking at this picture, I can’t help but remember the day I picked you up at the Country Bus station ukitoka Kakamega na bus ya Akamba.😁 Your styling evolution is testimony that you’re serving a real God. More life! Love you to death ❤”

Bien’s girlfriend Chiki also took to Instagram to celebrate Chimano with a sweet poem that left most of us jealous, after all when was the last time someone told you they loved you?

Here is her message;

“It took me ages to think really of what to write here, because @iamchimano’s friendship and love isn’t really something that words seem enough to describe. So I figured I’d steal some words from a great. Spoiler alert it’s long 😂

But we will more than we won’t,We got friendship
The kind that lasts a lifetime
Through any hardship, just know
You are a friend of mine ❤️
Chris Stapleton”

Awwwww babe I love you so so much. Always there for you.”

Sauti Sols Chimano was recently trolled after posting a photo of him online for what most termed as being ‘girlish behaviour’.

But the talented artiste did not let that dampen his spirit after all most of this trollers are just idle people who envy him for what he has achieved.

_clear_riversNo one should judge anyone based on their sexual orientation….. Accept everyone the way they are because we could analyze everyone commenting ignorantly here and guess what? Y’all gon have a thousand things we can criticize…. Just because you don’t agree with what @iamchimano chooses to wear doesn’t mean he is wrong either…

ms.naserianStupid people here commenting stupidly…. I still can’t believe people got such mentality on the 21st century . If you have a problem with homosexuality go lamba your own lolo… 🏳️‍🌈 🏳️‍🌈 let people be…

ronniezerThis is u @iamchimano , ur life, ur roles…..live life to the fullest and let shits keep smuggling naked words

ronniemugishaI wonder how people can be quick to judge someone, let him be after all it’s a free world ..love you @iamchimano

mama_linasachtiWhy the fuck does society want you to live the way they want? 😡😠. Am so proud of you…this is yo life, yo choice and yo fwakini business…if anyone has a problem with that, they can simply unfollow you instead of hauling nonsense….Low life suckers just want too much, don’t give them that. Fuck….all these negative comments… 😠

kaka_maasai@iamchimano life is always about what’s making you happy… reality is that life is too short so make your self happy please your self always. Personally I love you. I love you as a person I love your voice I love everything about you… keep going dear… #love #appreciation 💯💯

Fashionista Annabel Onyango and her hubby Marek (Sauti Sol’s Publicist) are expecting their first child come August this year. As they look forward to the baby’s arrival, they held the most lavish baby shower ever.

The baby shower dubbed “Our Baby Love fest” was held on June 11, 2017, at a luxurious hotel located in Runda, Nairobi. Annabel and her bae are known to hold the most jaw dropping parties, and if you recall their wedding back in 2015 could easily be dubbed the wedding of the year. 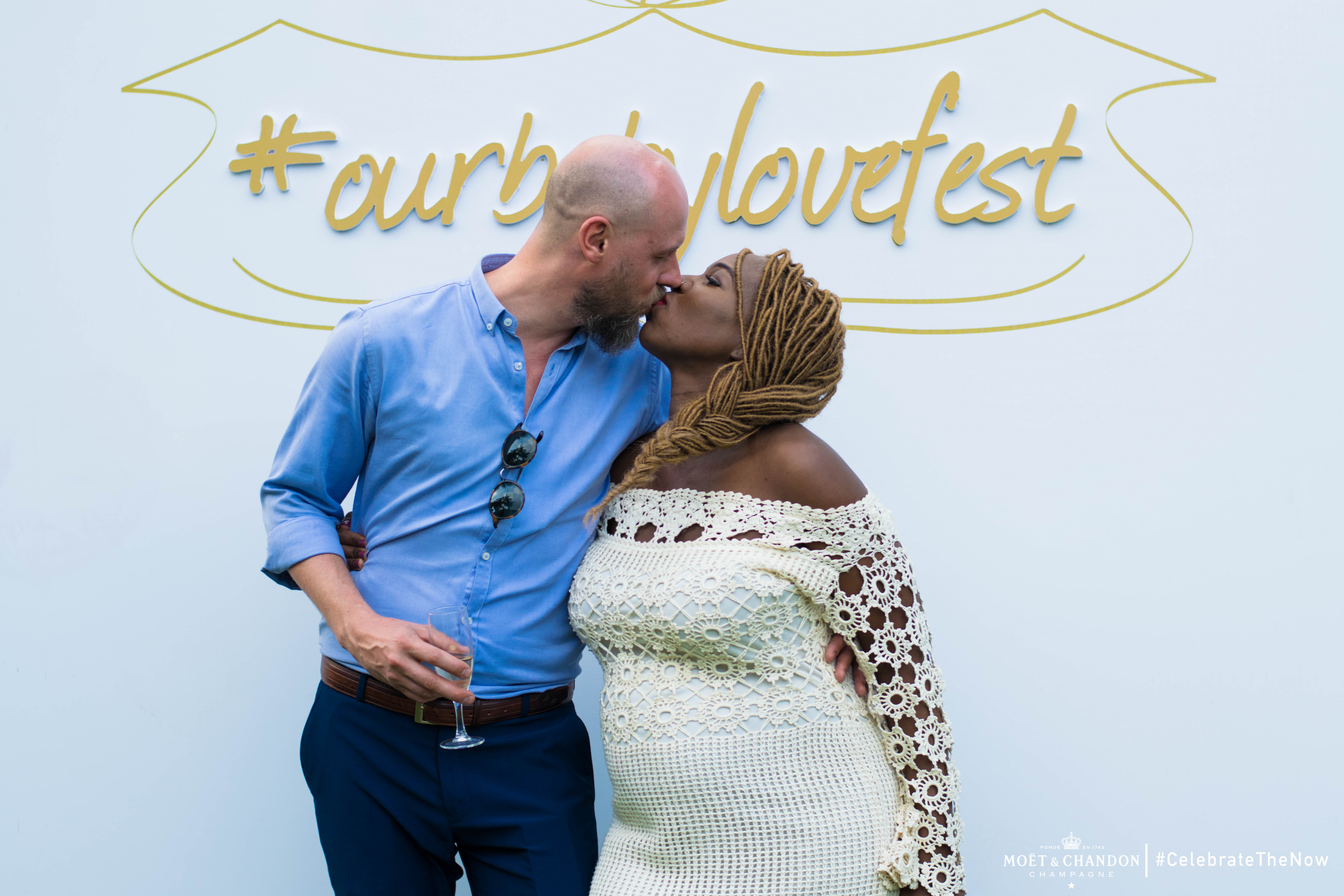 Annabel has pretty much been hiding her baby bump from the public and it is only on two occasion that we barely got a glimpse of her bump.

Deatisl of her lavish baby shower are now emerging, and the photos will leave many green with envy. From free flowing champagne, to gold accents, about 80 people attended the event and danced along live jazz music, eating a sumptous high tea buffet.

The baby shower was graced by big names in the industry, including Sauti Sol’s Bien Aime and Chimano, Coine Onyango of Homeboyz among others.