He died on Tuesday morning at the Nairobi Hospital Intensive Care Unit.

He has had a long battle with cardiac ailments.

In 2018 October, Odhiambo went to India to replace his pacemaker that had been implanted under the skin to help manage irregular heartbeats.

He returned to Kenya in November, but his body developed more complications that led to his admission to hospital.

Prior to his death he had shared a post on how life is meant to have ups and downs , but we have to remain strong

“Life is meant to be lived. Sometimes happy other times rough but with every up and down you learn lessons that make you STRONG.”

Going by the post, he did indeed fight for his life but as they say God only picks the best among his flowers.

Bruce was known for his music production skills under his company Johari Cleff. Also due to his close friendship with President Uhuru Kenyatta.

“I had it all, fame, celebrity status, before everything came crumbling down’ Former TV host Eddy Kimani narrates

He was gazetted as the Youth Enterprise Development Fund Chairman before he resigned in 2016.

“Our friend Bruce Odhiambo has been unwell since October when he went to India for replacement of the pacemaker and he developed lots of complications after he returned in November.

The body reacted to the new medication he was given and he got blisters on his hands and legs which became septic.

Here are the beautiful wives of your favourite politicians (Photos)

On Christmas day, his blood pressure went too low so he had to be rushed to the ICU and he was also kept in seclusion for the wounds to be treated well.

His BP has never stabilised thus really affected the functioning of the pacemaker and they couldn’t do dialysis coz his heart was quite weak.

On Saturday morning 4am, he suffered a massive cardiac arrest and he had to be put on full life support.

His family had to be called in for counseling and prayers too but this morning, his BP fell further to a low of 54 and the family was called in again.”

“As I write this, it’s risen again marginally to 112 and we hope it will stabilise…He’s really put up a good fight so please let’s keep praying for his recovery…today (January 7), he is still in a bad state and the BP is down again (44). The only thing that’s keeping even the nurses hopeful is the fact that he’s still conscious and they’ve given him everything to the maximum till they can’t go beyond the current limits. We keep praying.”

But he breathed his last at midnight that night.

Today marks the third anniversary of the death of Fidel Odinga.

Fidel passed away on January 4th, 2015 leaving behind a young widow and a son. Life has never been the same for his widow and his family in general.

The day Raila Odinga escaped assassination and how he did it

“In Loving Memory of FIDEL CASTRO ODINGA Novemnber 2, 1973 – January 4, 2015
Today like many days is full of fond memories of you. A loving son, a protective brother, a doting father and loyal friend.
Today is always.s painful because we more it is a reminder that life is sometimes rough, although we were blessed with years with you, our time together will never be enough.
For you were someone special who was thought so highly of and we will always remember you with affectio, warmth and love
Rest Peacefully Fidel Castro Odhiambo Odinga (Obange, ;nod NyarGem,)
ODINGA FAMILY .” 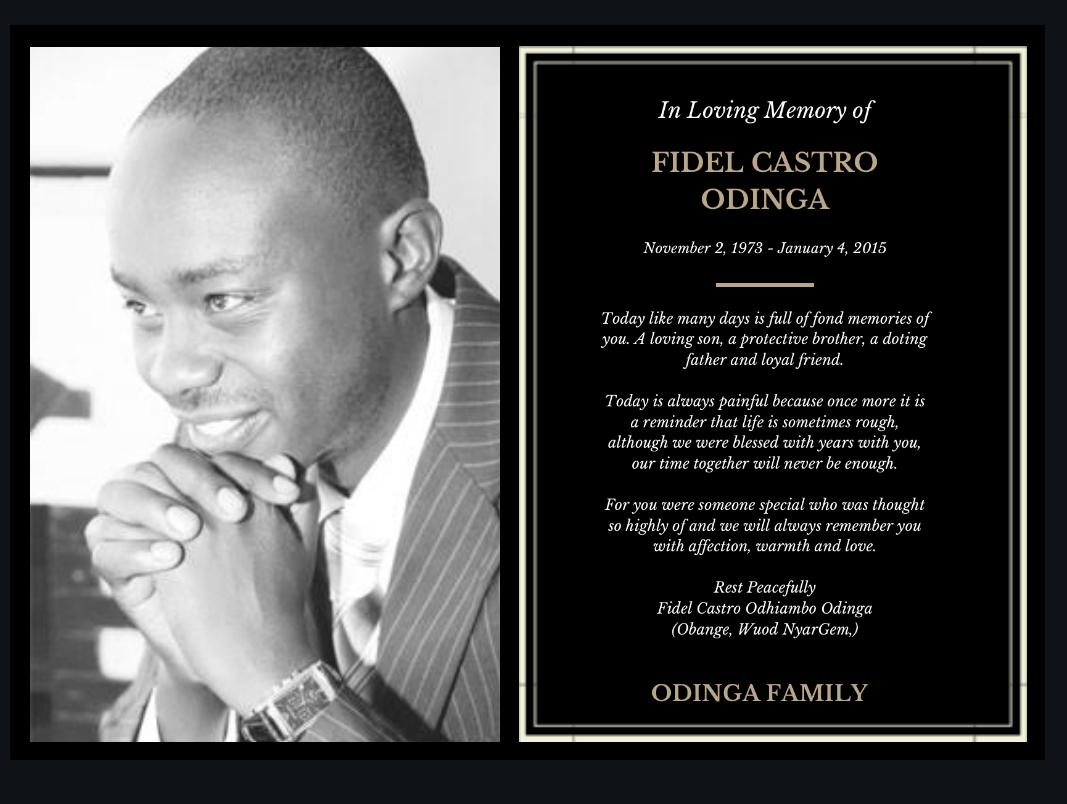 Below are photos of the family Fidel left behind even though not much is heard of them since his untimely death.

It is a sad day for the Kenyan Entertainment Industry as it loses yet another amazing actor after he lost his life in a stabbing incident.

Jamal is famously remembered from Vioja Mahakamani and Junior. We got to learn about his death through one of acting mates, Meggielle, who jotted down a message on social media.

She wrote, “My heart is so heavy I could barely believe it when I got the news of your passing on You were such a jovial man.. And moments with you at work creating a show together are everlasting Ulikuwa mtu wa watu… And your acting skills were something else You were always the life on set to say the least My heart bleeds for you.. I will miss you Life is just too short Mungu akuweke mahali pema peponi.”

He was allegedly killed by a woman friend in Mlolongo, Machakos.

A police report shows Grace Kanamu Namu is alleged to have stabbed the actor at Arks Hotel on Tuesday night after a quarrel between them.

The police report seen by the Star reads

“It was reported that Jamal Nassul Gaddafi (39), was having a party at Arks Hotel near 67 Airport Hotel on the night of December 11, 2018. There was a quarrel between him and his friend Grace Kanamu Namu (40). She picked a knife and stabbed him,”

Ametosha Mboga: Here is why Diamond Platnumz mum has finally approved of his marriage to his Kenyan bae Tanasha Donna

Gaddafi, who also acted in the KTN Junior series, was rushed to Shalom Community Hospital in Athi River where he was pronounced dead.

Athi River police boss Sharma Wario told the Star he was aware of the incident.

(I’ve heard of something like that, but I’m currently involved in the Jamhuri Day celebrations. We will take later).

May his soul rest in eternal peace.