Christmas is only a few days away and millions of people around the world are gearing up for the big day among them former US president Barrack Obama.

Obama visited the sick at Children’s Health to spread a little love.

In a post shared by Obama Foundation, the former head of state was seen giving back to the society

“Yesterday, Santa Obama stopped by @ChildrensHealth to spread a little Christmas cheer and remind us what the holiday season is all about—giving back to the communities that we call home.”

Ooh my ovaries: Photos of Nick Mutuma’s daughter that will melt your heart

In the video, Obama asks people to share this festive season with the less fortunate

“I know there are forks out there who are having a tough Christmas, and potentially in need of a little support.

If you have a chance this holiday season to help out someone having a tough time that’s what this festive season is all about.Wherever the family is wherever the people you love are, that’s where Christmas is.”

From buying their wives Lamborghini’s on anniversaries to flying private jets, here are the flashiest pastors in town

Yesterday, Santa Obama stopped by @ChildrensHealth to spread a little Christmas cheer and remind us what the holiday season is all about—giving back to the communities that we call home: pic.twitter.com/ATC2ksdNOO

From Classic 105 we wish you a merry Christmas and a prosperous 2019.

It’s not everyday that we interact with people who are related to Presidents.

Craig, who is Mitchelle’s older brother works as the head basketball coach at Oregon State University. 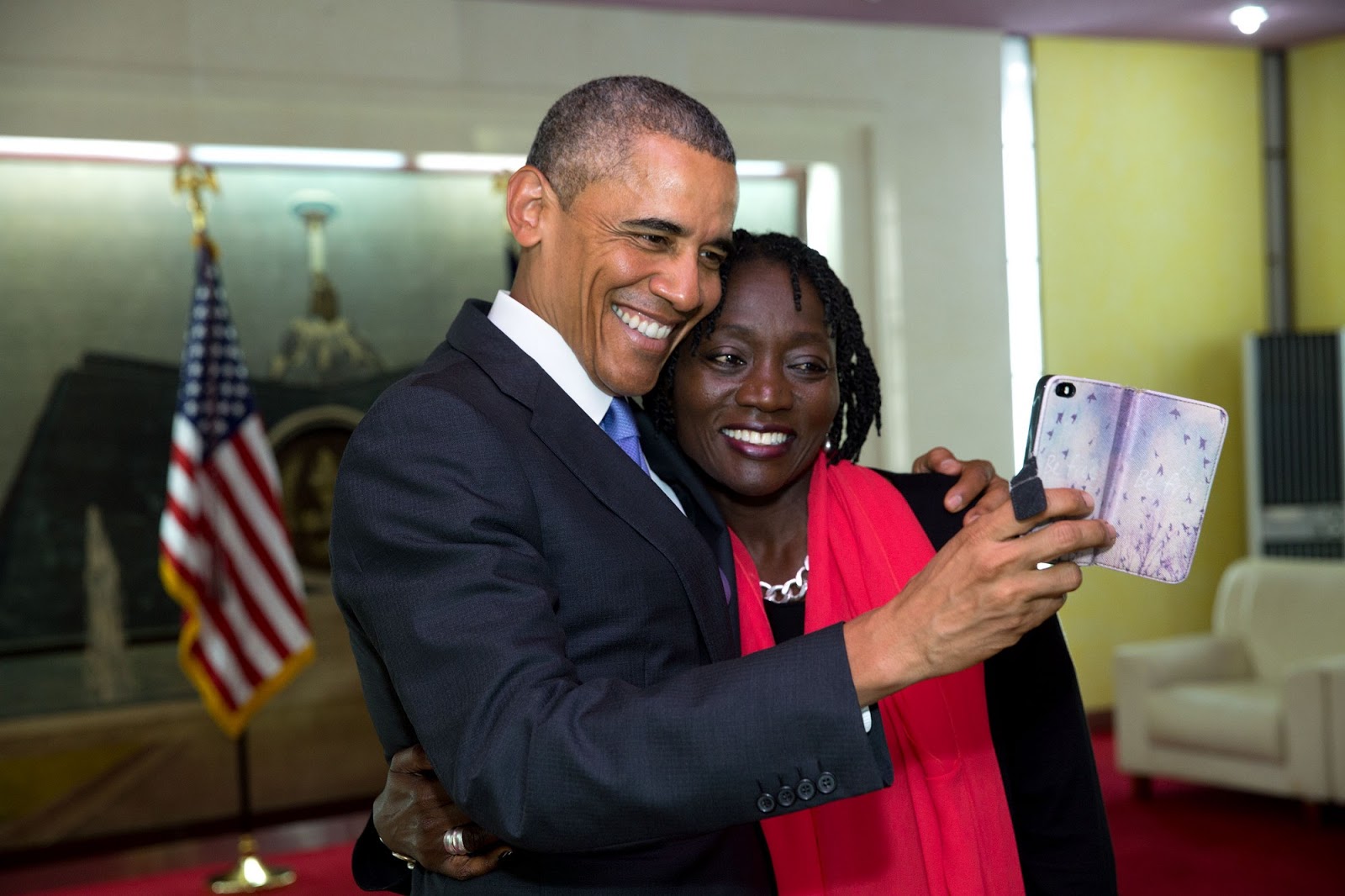 ‘I was forced to breastfeed my husbands snakes’ Narrates woman

They are Uhuru Kenyatta’s nephew and niece.

She is Uhuru Kenyatta’s cousin.

She is a celebrated female artiste and a niece to Uhuru Keyatta.

Former United States first lady Michelle Obama has opened up about suffering and using in-vitro fertelization to conceive her daughter.

IVF refers to a laboratory procedure in which sperm are put in a special dish with unfertilized eggs to achieve fertilization. The embryos that result can be transferred into the uterus or frozen (cryopreserved) for future use

In the book Becoming, America’s first black first lady goes beyond politics, digging deep into some personal issues from a miscarriage to using in-vitro fertilization to conceive her daughters to marriage counselling.

‘You will live to give a testimony to your great grandchildren.’ Mishi Dora to her kid after word went round that he has died

“I felt lost and alone, and I felt like I failed because I didn’t know how common miscarriages were because we don’t talk about them,”

We sit in our own pain, thinking that somehow we’re broken.”

‘You will live to give a testimony to your great grandchildren.’ Mishi Dora to her kid after word went round that he has died

“It turns out that even two committed go-getters with a deep love and robust work ethic can’t will themselves into being pregnant,”

We had to do IVF,” she told ABC, in excerpts of an interview that will air in full on Sunday.

She revisits the thrill of her romance with Barack, which began when she was his advisor at a Chicago law firm, describing it as a “toppling blast of lust, gratitude, fulfilment, wonder.”

But she admits the couple on occasion turned to counselling, where they “learned how to talk out” problems.

Nelson Rolihlahla Mandela was and is still a world wide icon for his tireless efforts in fighting apartheid in South Africa.

The humble man born in July 18, 1918  and sadly breathed his last in December 5, 2013. Five years on he is still celebrated for his efforts to better South Africa.

That zeal and effort saw him jailed for 27 years from November 1962 until February 1990.

Well as the world celebrates Mandela’s 100th birthday in his absence, SA President Cyril Ramaphosa said he would mark “Mandela 100” by donating half his salary to charity to honour “the great sacrifices he made and his tireless commitment to improving the lives of the most vulnerable.”

Former US President Barrack Obama and his wife Michelle Obama are in South Africa and in his speech on Tuesday, Obama said

His lecture, titled “Renewing the Mandela legacy and promoting active citizenship in a changing world,” tracked the transformation of the world, particularly in terms of race relations and human rights, over the past 100 years.

He went on to urge people to follow Madiba’s example

“We have to follow Madiba’s example of persistence and hope,it’s tempting right now to give in to cynicism. To believe that recent shifts in global politics are too powerful to push back. That the pendulum has swung permanently.

Just recently, a Nelson Mandela exhibition was opened to celebrate the late apartheid leader in a function attended by Prince Harry and the wife Meghan Markle.

The event was held at Southbank Centre’s Queen Elizabeth Hall in London and in attendance was Nelson Mandela’s grand daughter Zamaswazi Dlamini-Mandela.

The Nelson Mandela Centenary Exhibition celebrates Mandela’s life. It is jointly curated by the Apartheid Museum in South Africa, the British Anti-Apartheid Movement Archives and the Southbank Centre.

This is not the first time the Royal Family is celebrating Mandela. In 2015, Prince Harry visited the archives at the Nelson Mandela Foundation Centre of Memory in Johannesburg, South Africa.

After largely staying quiet since leaving the White House in 2017, Barack and Michelle Obama will soon be coming to your laptop screen.

The former president and first lady officially announced on Monday that they have entered a multi-year producing partnership with Netflix.

Barack and Michelle plan to deliver a ‘diverse mix of content’ that could range from scripted and unscripted series to documentaries and features.

And their content will not be exclusive to American subscribers. Netflix has promised their projects will be available to all 125 million members in 190 countries.

The Obamas have created Higher Ground Productions, the company under which they will produce content for Netflix.

Obama reportedly told associates he does not plan to use his new platform to attack Donald Trump or fight against Fox News, according to the New York Times.

Instead the former president plans to highlight those who are ‘able to promote greater empathy and understanding between people’.

‘One of the simple joys of our time in public service was getting to meet so many fascinating people from all walks of life, and to help them share their experiences with a wider audience,’ Obama said in a statement.

‘That’s why Michelle and I are so excited to partner with Netflix.’

‘We hope to cultivate and curate the talented, inspiring, creative voices who are able to promote greater empathy and understanding between people, and help them share their stories with the entire world.’

Michelle also highlighted that she hopes she and Barack can use their new platform to help open minds and hearts.

Ted Sarandos, Netflix’s chief content officer, said the company was ‘incredibly proud’ to have the Obamas on board

‘Barack and I have always believed in the power of storytelling to inspire us, to make us think differently about the world around us, and to help us open our minds and hearts to others,’ she said.

‘Netflix’s unparalleled service is a natural fit for the kinds of stories we want to share, and we look forward to starting this exciting new partnership.’

Ted Sarandos, Netflix’s chief content officer, said the company was ‘incredibly proud’ to have the Obamas on board.

‘Barack and Michelle Obama are among the world’s most respected and highly-recognized public figures,’ he said in a statement.

‘[They] are uniquely positioned to discover and highlight stories of people who make a difference in their communities and strive to change the world for the better.’

News that the Obamas were in negotiations with Netflix first broke in March.

It has not been disclosed how much the Obamas will receive for the partnership, but major producers like Shonda Rhimes and Ryan Murphy have received upwards of $100million in their own respective deals with the streaming site.

The Obamas signed a joint $65million book deal with Penguin Random House in March for their respective memoirs.

Michelle Obama and Barack Obama celebrated their 25th anniversary, and the former First Lady marked the special occasion with a beautiful black and white photograph of the two young love birds on their wedding day.

She wrote to Barrack Obama;

Happy 25th anniversary @barackobama. A quarter of a century later, you’re still my best friend & the most extraordinary man I know. I

Many other folks turned to Twitter to celebrate the couple’s love and leadership during their time in the White House with some photographs and overwhelming messages.

@thebaemarcus: Happy 25th anniversary to Barack and Michelle Obama, may you enjoy another 25yrs together. Nothing but love for my President and First Lady!

Also read; Barrack Obama confesses what he did after dropping off his teenage daughter at college

@Shaunsmiling wrote: Love them & this WORLD misses them in the White House!!!Happy Anniversary!

May your love forever shine!!! My wife and I are celebrating 2 years today I can’t believe we have the same anniversary #happy #anniversary 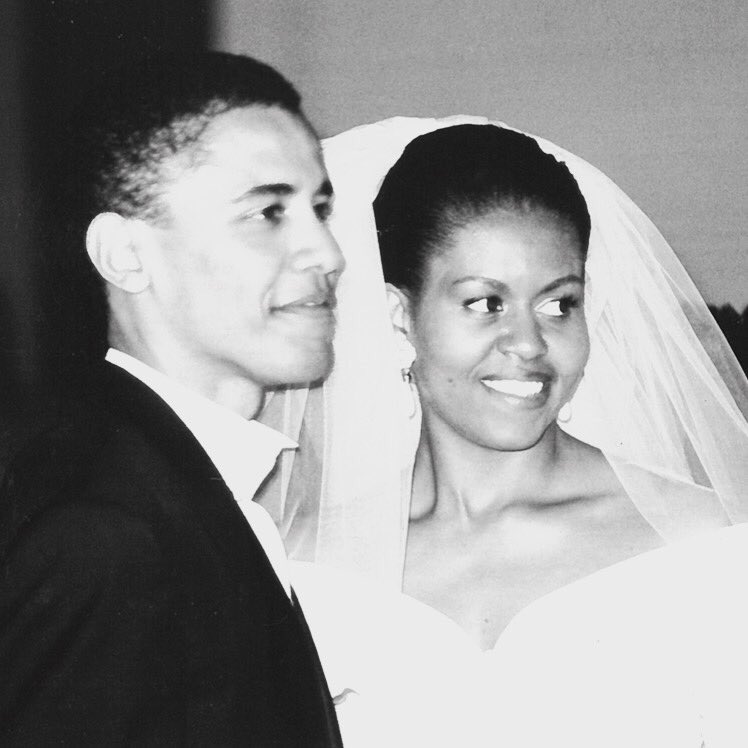 Secret Service agents have detained a man who begged Malia Obama to marry him at her internship and even pretended to be blind to stalk the former first daughter, sources say.

Jair Nilton Cardoso, 30, went up to the fourth floor of the Manhattan building where 18-year-old Malia is currently interning, held up a sign, and starting shouting that she should marry him on April 10, sources told the New York Daily News.

Malia’s Secret Service agents quickly kicked him out of the building.

But he returned just two days later on Wednesday, April 12, and followed her out of her other interning job, in the West Village.

Agents in plain clothes noticed Cardoso pretending to be blind while watching the teen from across the street.

The agents quickly surrounded the stalker, who was dressed in a Rastafarian cap, and interrogated him for nearly an hour, while Malia sneaked out of the offices of Weinstein Co, through a side door.

In photos from the scene, the agents are seen giving the man what appears to be a stern talking to as they warned Cardoso to stay away from Malia, the daughter of former president Barack Obama and first lady Michelle.

They also recognized him as have repeatedly tried to enter White House in the past. The agents stopped Cardoso, making him fill out paperwork and took his picture before ordering him to leave the area.

The stalker was then detained and taken to a Brooklyn hospital for a psychiatric evaluation, sources said.

The Secret Service have now reported Cardoso’s behavior to a local police station and authorities are now considering whether to file stalking or harassment charges against him.

The eldest daughter of former President Barack Obama is currently spending the spring interning at the film production company.

The 18-year-old is set to start school at Harvard College in the fall. Before taking the internship, the aspiring filmmaker spent the fall traveling South America.