Date nights spent playing board games or painting together spices up a couple’s sex life, according to new research.

Creating art or taking each other on at Monopoly, cards, checkers, chess, puzzles, dominoes or even word games boosts production of a chemical called oxytocin – known as the ‘hugging hormone’ as it’s released during love-making.

Interestingly men wielding their brushes released twice as much as women – or couples doing the games. 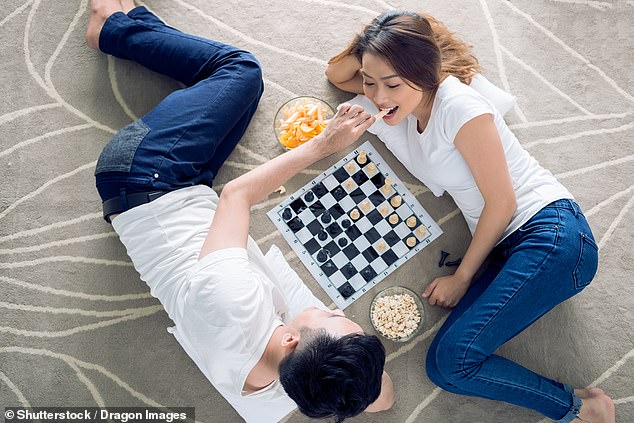 Assistant professor of child and family studies Dr Karen Melton at Baylor University in Texas, said: ‘We were expecting the opposite – that couples playing the board games would interact more because they were communicating about the games and strategies, or because they were competing, and with more interaction, they would release more oxytocin.’

This is because it’s linked to bonding and family cohesiveness, she said.

The team also expected painting couples would be more attentive to the instructor and to the canvas than to their partners.

But art class participants instead reported more partner-touching than couples playing board games.

Dr Melton said: ‘Typically, an art class is not seen as an interactive date with your partner.

‘But sometimes couples that were painting turned the activity into a bonding time by choosing to interact – putting an arm around their partner or simply saying, ‘Good job.”

Fena Gitu has taken the music industry by storm ever since she released her latest jam, ‘Doing Her Thing Tho’. She went ahead to give certain women a shout out for their marvelous work and doing everything they can to make things work for them. It’s basically an anthem for the women and we have embraced it fully.

In an interview with Buzz, she revealed that she actually got a special message from Lupita and she couldn’t keep calm.

She said, “I was happy when I received a special message from Lupita Nyong’o after she heard my song. She sent someone to deliver the message and I hope one day I will meet her. I also mentioned Victoria Rubadiri in the second verse and I just like the way she presents herself. She is very classy, simple in a nice way and she seems like such a mice person. It was a good addition. The two Kimani’s who I also mentioned in the song (Edith and Victoria) are doing their thing and they were very supportive when they heard the song.”

She also went ahead to narrate to Buzz the kind of treatment she received during Omarion’s concert as she was performing on the same stage as the international superstar. She stated that when the star arrived, there was a lot of commotion backstage to a point she couldn’t get access back to her tent to get her stuff.

She said, “Event organisers should accord local artistes respect. During the Omarion concert that was held recently, I had to let my frustrations known. There was a lot of commotion backstage when he was ushered in, everything changed. Artistes on the lineup were not allowed to go back to their tent to get their stuff including me. I was frustrated because I was at my own concert which I had performed and I should have been allowed to go back to my tent. This was not the first time it happened and I’m pretty sure it will not be the last one. I hope in the Wizkid concert there will be order. For me there is a certain courtesy you extend to an artiste who is performing at that kind of platform.”