A Kenyan man has narrated how he begged intruders to spare his 13-year-old daughter, as they dragged her into the night and gang-raped her.

But that was not before they repeatedly drove nails into his head.

The man said the thugs quickly ransacked the house, picking valuables such as phones while another went into the bedroom where his daughter was.

“It was the night of February 4, 2014, when a group of men hit my door with a big stone sending it gaping. Some got inside while two remained at the door to keep guard.

He was badly scarred and left for dead.” the father told a Kibera court on Friday.

He said the man came out of the bedroom pulling his daughter, but when he pleaded with them to release her, it only earned him a nail in the head.

The father helplessly watched the intruders take his daughter away as he lay in pain.

“One of the men had a wooden frame with nails in it. He used that to hit me, driving the nails in and out of my head,” he said.

I yelled, I begged, I shouted, but every attempt earned me more nails in my head. Sometimes, they used a knife to stab me. The more I acted, the angrier they got.

Eventually, they left me writhing in pain as they disappeared into the darkness with my daughter,” he told the court.

The man told Kibera senior resident magistrate Barbara Ojoo that he dragged himself to his brother who lived nearby.

He found him and his wife and told them about the attack. They went to the police station the following day where they reported the attack before embarking on a search for the daughter.

‘My pastor husband forced me to abort, beat me and raped me’ Cries Terry

After hours of searching, they found his daughter locked up in a house at a nearby plot crying in great pain. Inside the house was a picture of one Nelson, whom he knew very well.

“I know all the accused persons here. Nelson’s father is my personal friend,” he told the court. I together with other members of the family took her to Nairobi Women’s Hospital where she was treated and after that we began to look for the culprits,” he said.

They nailed my head and defiled my daughter, man tells court

The daughter wept as she testified.

“They appeared in my bedroom with a bright spotlight which they shone in my eyes. I was chatting on my phone which they grabbed ruthlessly,” she testified.

She screamed to alert her father, unaware that he had already been captured. She said they dragged her out of bed to the living room.

“He tried to defend me, but they nailed him in the head. One picked a knife and stabbed him and he fell down. They would punish him even when he turned his head to my direction,” she narrated.

All of them defiled me repeatedly, one keeping guard as the next jumped on me, at least three rounds.

It was very painful and when I screamed, they threatened to kill me. They ordered me to stay quiet for my own sake.”

The now 17-year-old told the court that they left her father took her to a nearby place with overgrown grass.

Then one of the thugs dragged her to a house, where they both spent the night.

“Nelson took me to his house and slept beside me the whole night. He did not touch me again. In the morning, he locked me inside and left until I was found by my uncle,” she said.

She said her uncle called other family members who broke into the house and rescued her. She identified the picture of Nelson that was hanging inside the house.

Her father took the photo which he used to find Nelson, one of the accused in the case.

“My friend called me and informed me that he had seen Nelson in a chang’aa den drinking. I sent him Sh50 and asked him to keep buying him alcohol as I sought police to arrest him,” the father said.

Nelson Vasereze, Charles Onzere and Abdi Mutua were arrested and charged with abducting, defiling or gang-raping a child and robbery with violence.

State counsel Nancy Kerubo said other accomplices are still at large. The case will proceed on November 27. 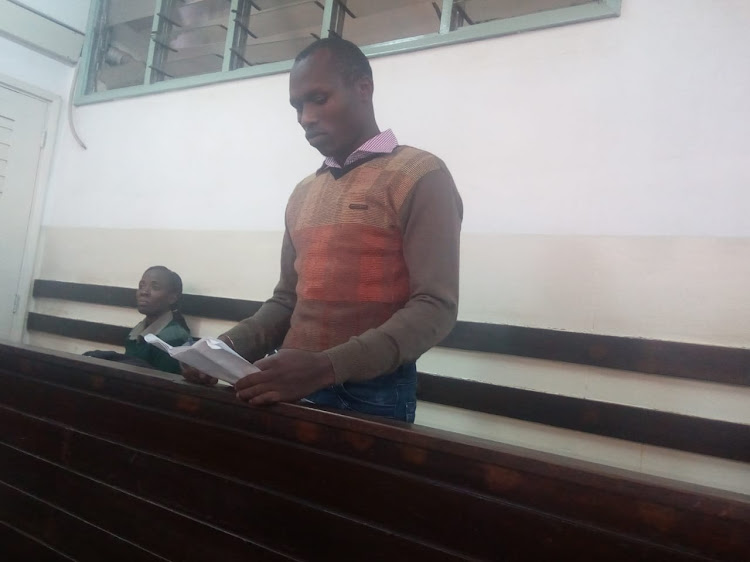