The 36-year-old, who has enjoyed a remarkable tennis ‘momback’ since the birth of Alexis Olympia, 10 months ago, raged on social media that it had been proven that she is tested more than other players by US Anti Doping.

Serena, who reached the final of Wimbledon two weeks ago, said the only consolation from the regular testing was that she was ‘helping to keep the sport clean.’

She took to her twitter account to rant about she termed as discrimination after it emerged that she was the only one being tested,and to top it all being tested the most. She wrote 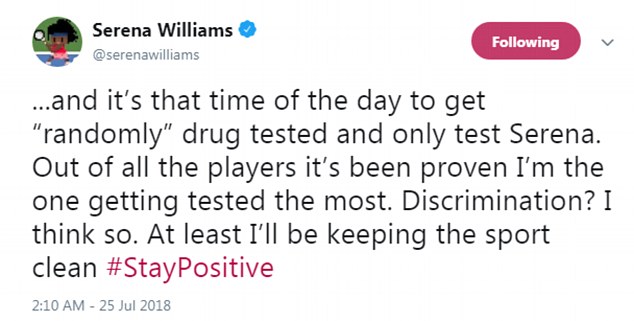 The star, who is married to tech mogul Alexis Ohanian, wrote: ‘…and it’s that time of the day to get “randomly” drug tested and only test Serena. She wrote

“Out of all the players it’s been proven I’m the one getting tested the most. Discrimination? I think so. At least I’ll be keeping the sport clean #StayPositive”

Around the same time as the tweet, the mother-of-one had been posting about the bliss of putting her baby girl to sleep, saying:

“I can’t seem to put her in bed I’m loving holding her in my arms. I want to milk every second!”

Earlier this month, Williams told reporters at Wimbledon she does not care how often she is drug tested as long as other players are treated in the same way.

The seven-time champion reiterated her claim that she undergoes more checks for doping than anyone else on the circuit.

The 36-year-old American went on the front foot when asked about a recent story that an official from US Anti Doping left her house empty-handed after a visit on June 14.

According to Daily Mail, Serena explained that he arrived 12 hours ahead of her allotted daily ‘whereabouts’ hour and that it was among a welter of out-of-competition tests being demanded of her.

‘How is it I’m getting tested five times in June? It’s only June, I’ve been tested five times. I’m OK with that, as long as everyone is being treated equally. That’s all I care about. I despise having people in our sport that aren’t being honest.I’m totally OK with testing and I encourage it. What I want to know is that everyone is getting tested, that we are really working to keep this sport clean.”

“I feel like it’s equality, that’s all I’ve been preaching, it’s all about equality. If that’s testing everyone five times, let’s do it. Let’s be a part of it. I never knew that I was tested so much more than everyone else. I didn’t realise it was such a discrepancy, at least with the American players, both male and female.For me it’s a little frustrating. How can I have a missed test when it’s nowhere near the time I should be there? It’s really disappointing, shocking.”

Williams is actually in good company when it comes to being heavily tested.

Roger Federer has revealed that he has undergone seven examinations of his blood and urine in the past month. Players coming back from breaks tend to be more aggressively targeted.

Here are five fashion statements that President Uhuru spends his millions on...

‘Here is why your wife looks older than your mother,’ Akothee reveals
[fbcomments data-width="100%"]
This Week's Winners