'She was my best daughter!' Catherine Kasavuli's mom admits

In a moving tribute, Rachel, 90, narrated how Catherine would leave work and go farming. 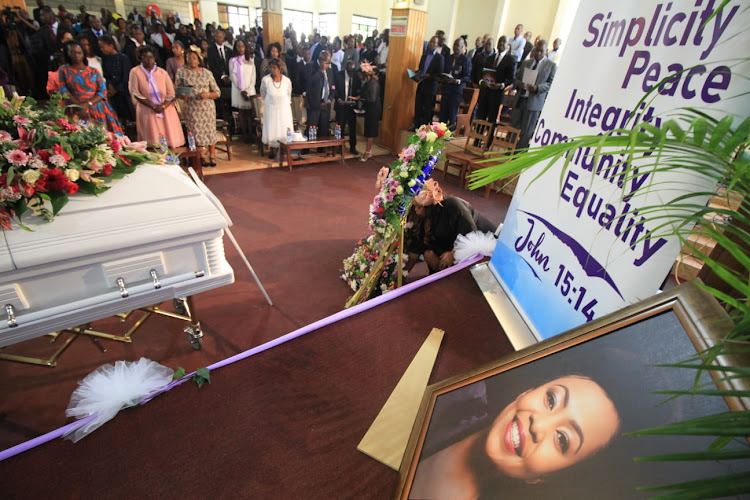 Rachel Kasavuli had a glowing mass for her daughter Catherine Kasavuli telling mourners that her daughter would ask for meat from her dad for the late news anchor to then give her.

"She was my best daughter. This my other daughter is good but she stays in the US and sends me money. But Catherine was the best....Catherine used to beg her father to give her meat only for her to give it to me. How beautiful can that be?” she said.

"I don't love kales, when I eat kales I do not feel well."

Rachel, 90, narrated how Catherine would leave work and go farming.

“Catherine was a farmer, and she used to plough next to the Nyayo stadium. When she left work, she used to take the jembe and bring back food for us to eat. She was an incredible lady,” she said.

"My daughter's death has really affected me and I am still trying to come to terms with her death."

She urged women who want to give birth to start naming their children Catherine.

The church service was held at the Friends International Church along Ngong' Road.

Catherine, the fourth child of Ezekiel Kasavuli Agingu and Rachel Inyangara Kasavuli, was born on February 22, 1962.

She grew up in Nairobi West for most of her young life.

Catherine was described by those close to her as a bright, expressive and eloquent young girl with an enthusiastic sense of humor.

Catherine not only excelled academically but also in athletics- 100 metres sprint race.

Kasavuli passed away on Thursday night aged 60 at the KNH after battling with cancer.

Kasavuli had been admitted at the facility since October 26,2023.

In November, colleagues and friends in the media industry mobilised people to donate blood for urgent transfusion after she was admitted at KNH.

Kasavuli's employer KBC appealed for blood donation as she is admitted to Kenyatta hospital's Private wing.

She had recently returned on TV after KBC hired her among veterans to revamp the media house.

Kasavuli had taken a four-month break and returned to her Instagram in October.

Catherine Kasavuli's son Martin has given an update on the burial arrangements of his late mother.
Latest
1 month ago

'You are hypocrites!' Ciku Muiruri blasts politicians after Kasavuli's demise

Media personality Ciku Muiruri has hit out at politicians as tributes to late TV queen Catherine Kasavuli continued to pour in.
Latest
1 month ago
Relationships
12 January 2023 - 14:15