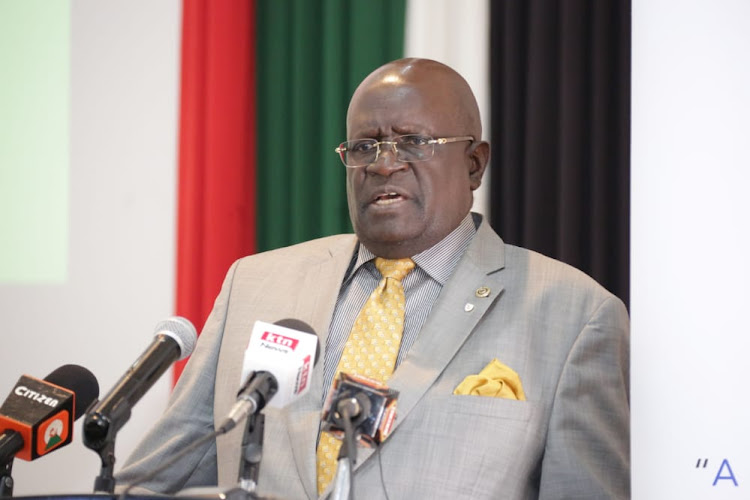 To the University of Nairobi students, former Education CS George Magoha was a “Buffalo.” To many who worked with him in the education sector, he was a no-nonsense man.

But to George Albert Omore Magoha himself, he was simply the son of Magoha.

The son of Magoha died on Tuesday at the age of 71 after a long and illustrious career in medicine, academia and public service.

According to a statement by The Nairobi Hospital, Magoha collapsed at home and was rushed to the facility, where he was pronounced dead after efforts to resuscitate him failed.

His death was a double tragedy to the Magoha family coming as he was preparing to bury his brother Prof Richard Magoha who died in Texas on December 6. He was due to be buried on Saturday.

His death comes slightly over a year after the death of another brother who lived and worked in Stockholm, Sweden.

The brother, Charles Agunga died in 2021. Magoha amazed Kenyans when, during his vetting for the post of Education Cabinet Secretary in 2019, he presented a 91-page CV .

The CV paints a picture of a man with firm roots in the education sector. It describes a man with zeal and gusto for handling tasks and responsibilities in a strict and pro-fessional manner.

His started his career as an in-tern and rose to senior resident and clinical lecturer in surgery at the Lagos University Teaching Hospital.

Magoha joined the University of Nairobi in 1988, where he became a full professor in 2000.

It was at UoN, where he would later serve as the vice chancellor, that he was nicknamed ‘Buffalo’ because of his boldness in taking head-on anyone who rubbed him the wrong way.

He prided himself on many achievements, including being the first VC to be appointed competitively and overseeing the near completion of the 22-storey university towers.

During his tenure, student riots, which had become a norm at Kenya’s pioneer university, were quelled down.

His boldness, strict and no-nonsense character saw him appointed as the Kenya National Examinations Council chairman with the mandate to clean the mess and restore sanity at the agency accused of failing to tame exam irregularities.

Magoha was the fourth Education CS to serve under the Jubilee administration.

Following the end of the administration after the August 9, 2022, general election, Magoha on January 17 made a comeback to the classroom as a university don.

He joined Maseno University in Kisumu as professor of surgery at the institution’s school of medicine.

Born in 1952, Magoha undertook his primary education in Yala and Nairobi before joining Starehe Boys Centre and Strathmore College for his High School education.

He then proceeded to the University of Lagos in Nigeria where he studied Medicine.

He trained in executive management at the Stanford University, Graduate School of Business, and has many international profession-al honours and awards.

Magoha is survived by his widow Barbara and the couple’s only child Michael.

Condolences streamed in last night as news of his death broke.

President William Ruto eulogised him as a “gifted, unique, distinguished and great servant of Kenya”.

“Magoha is a towering giant of our time, a great man who stood tall in the academy, where he excelled in learning, teaching and research, as well as in administration,” the President said in a statement.

“Throughout his tenure, he evinced a commitment to high standards in the public service and an uncompromising integrity.”

Opposition chief Raila Odinga described him as an intellectual who inspired many.

“We will re-member him for his incredible intellect, wit, and ability to inspire and challenge us to do our best. My condolences go out to his family and colleagues. May he Rest In Eternal Peace,” he said in a statement.

The body was moved to Lee Funeral Home.

His death comes a few days after he lost his brother. The brother was too a professor.
Latest
1 week ago
na The-Star
Latest
25 January 2023 - 09:00