"I have known the mother of the nation, who is the wife of the president, when she was running a travel business in her office." - Arati said. 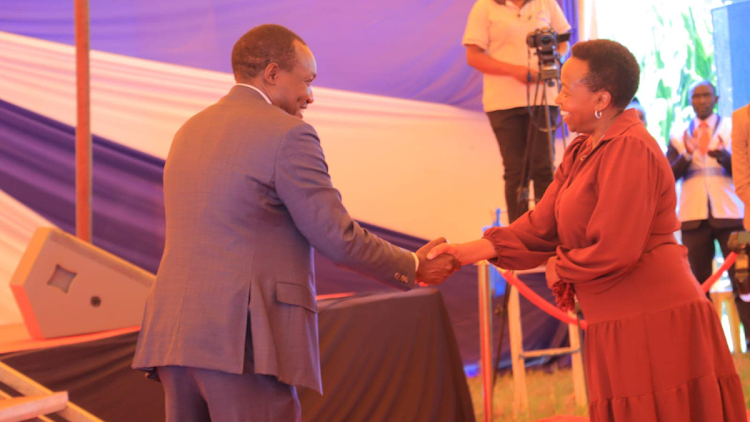 Kisii governor, Simba Arati has opened up about how first lady Rachel Ruto helped him when he was struggling to find a living in Nairobi county.

Ruto was speaking at a church service that Mama Rachel attended in Kisii county where he revealed he and Mama Rachel were friends who knew each other before the governor started his political journey.

Arati said that Rachel helped him with the first 250 thousand when he wanted to start the business.

"I want to explain one thing, I have known the mother of the nation, who is the wife of the president, when she was running a travel business in her office. The person who made me earn the first 250 thousand shillings while I was in Nairobi is this mother," Arati said.

He said that many people knew that he was selling vegetables that helped him contribute to college fees.

"I know many people know that I used to sell vegetables, I went to college, I finished, I came back and continued to sell vegetables and I failed, what should I do now? I entered the business as a travel agent, and I would need someone to sign for me to succeed. I went and found her at her office and she didn't know me. I did the first business which was a blessing from this mother," Arati said while thanking Rachel's mother.

Despite Arati being in the Azimio wing with which he won the governorship, he said he had nothing wrong with the UDA party which is led by President Ruto, because he knows how Mama Rachel gave him the blessing for his first business that became his breakthrough.

Head of State William Ruto and his wife Rachel Ruto are proud grandparents after their son Nick Ruto and his wife Evelyn Chemutai welcomed their ...
Latest
3 weeks ago
na Moses Sagwe
Latest
24 January 2023 - 13:29