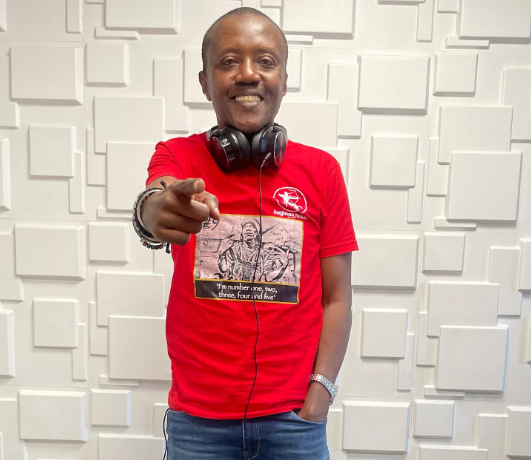 Classic 105 co-presenter Mwalim King'ang'i is tempted to lose weight through any means possible.

Speaking on #MainaAndKingangi in the morning segment 'Kasheshe,' he said he wanted to lose his Kitambi.

"It is about to become a national issue. Celebrities are now going for gastric bypass. You come back without the kitambi. "

Gastric bypass is surgery that helps you lose weight by changing how your stomach and small intestine handle the food you eat.

"To reduce body fat, unless you undergo liposuction, you are going to undergo an exercise regime. Do not be lied to," Maina advised.

King'ang'i said he is tempted by a billboard advertisement he saw demonstrating how one can lose weight fast.

"I saw a billboard of men with tits that they are able to cut them. Have you ever held a child who started sucking your man boobs?" He asked

King'ang'i said once he undergoes the procedure in South Africa he will come back looking all sexy.

"I will come here looking hot like Moya David and dancing like him. I have thought about it, I will only have to buy a speaker like his and a bandana and start making money."

"Do not believe everything you see on social media. You will not get a six-pack in a week. Get into the habit of exercising, that's the only way you are gonna save yourself."

Hamisa Mobetto claps back at trolls questioning her son's paternity

Hamisa has said just because some women do not know who fathered their kids does not mean that she does not know her son's dad.
Trending
2 months ago
na Elizabeth Musyimi Reporter
Latest
01 December 2022 - 11:00