The former Prime Minister has termed the removal process vindictive 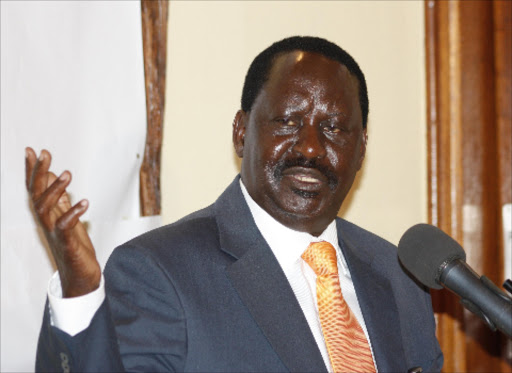 Raila Odinga has broken his silence over the ongoing removal process of the four dissenting IEBC commissioners, saying it will end badly for President William Ruto.

Raila has termed the removal process vindictive, saying if it doesn't stop, he will personally lead a retaliatory drive against the President.

"The injustice being inflicted on the four IEBC commissioners, if it proceeds as currently conceived, will mark the beginning of a massive pushback against Ruto and those who think like him... We will openly and robustly lead that pushback," Raila said.

Raila spoke as hearings on four petitions seeking the removal of the four commissioners who sharply and openly differed with chairman Wafula Chebukati on election results tallying and announcement started on Thursday.

They walked out of the national tallying centre at the Bomas of Kenya on September 15 shortly before Chebukati declared Ruto the President-elect.

Cherera led her colleagues in stating that they could not own the results owing to the opaque nature of the final phase of the results verification.

The Legal and Justice Committee of the National Assembly is hearing the petitions filed against them by Geoffrey Langat, Steve Gerry, Dennis Nthumbi and the Republican Liberty Party.

Members of the committee affiliated with the Azimio camp, however, walked out of the hearings in protest saying the committee has no jurisdiction to prosecute the petitions.

In a press statement shortly thereafter, Raila warned that if the removal process of the four commissioners continues unabated, it will end in 'premium tears' for some individuals.

He said the conduct of the commissioners was part of the presidential petition and none of them was found guilty of an offence apart from Chebukati who was indicted for acting unilaterally.

"With all the problems Kenyans are going through, a focus on punishing four commissioners who did not agree with their chairman is trivial, vindictive and vile. It must stop. It will not end well," Raila said.

The ODM leader said Parliament's role should stop at determining whether or not the allegations against the commissioners warrants a tribunal hearing.

On Wednesday, commissioner Masit filed a preliminary objection seeking to stop the Legal and Justice Affairs Committee from hearing the four petitions.

Azimio leader Raila Odinga has  clarified  his recent stand on GMOs that has elicited sharp debate among Kenyans.
Latest
1 week ago

Politician Raila Odinga has said he will fly to Qatar if African teams make it to the final. Raila said he wishes that the teams go up to the final ...
Latest
1 week ago
na Emmanuel Wanjala
Latest
24 November 2022 - 15:51