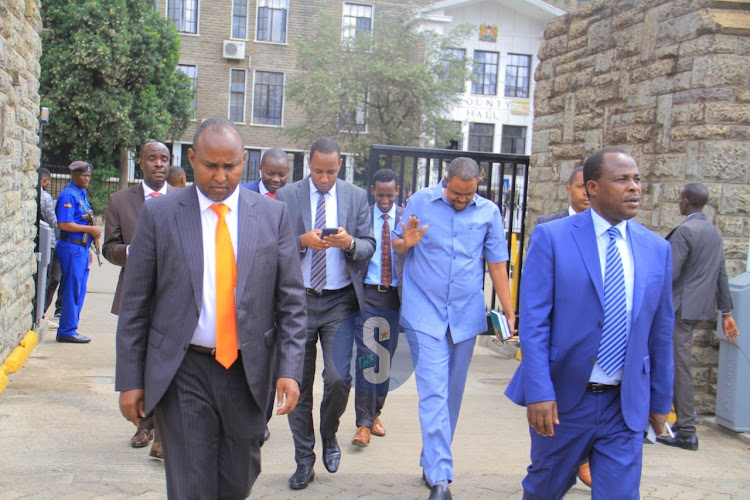 The IEBC Four's lawyers and the minority MPs have left the petition proceedings.

The lawmakers and the legal brass for Juliana Cherera, Francis Wanderi, Irene Masit, and Justus Ngangaya said the committee of Justice and Legal Affairs has no jurisdiction to prosecute the petitions.

He was joined by MPs TJ Kajwang, Stephen Mogaka and Aden Daudi.

He was joined by MPs TJ Kajwang, Stephen Mogaka and Aden Daudi.

The IEBC officials at the centre of the petition are Juliana Cherera (vice chairperson), Irene Masit, Francis Wanderi and Justus Nyangaya.

The commissioners openly differed with chairman Wafula Chebukati and two other commissioners over the August 2022 presidential vote tallying and final results.

The four, in what exposed the deep rift at the electoral agency, did not own the results that gave William Ruto victory in the face-off with Azimio’s Raila Odinga.

Earlier, Raila and Wiper's Kalonzo Musyoka attended the hearing of the petition seeking the ouster of the IEBC Four.

They were accompanied by Narc Kenya leader Martha Karua and Azimio Communications director Makau Mutua during the Thursday hearing.

There is a video on Nairobi Woman's Rep Esther Passari's TikTok that is fast gaining likes from KOT. Mike Sonko is among those netizens reacting to ...
Latest
4 days ago

Raila Odinga has broken his silence over the ongoing removal process of the four dissenting IEBC commissioners, saying it will end
Latest
4 days ago
na MOSES ODHIAMBO
Latest
24 November 2022 - 14:32