Ruaka building collapse results in the death of a couple

The 3.30 am incident happened barely two months after five people lost their lives in Kirigiti near Kiambu town after a seven-storey building under construction collapsed 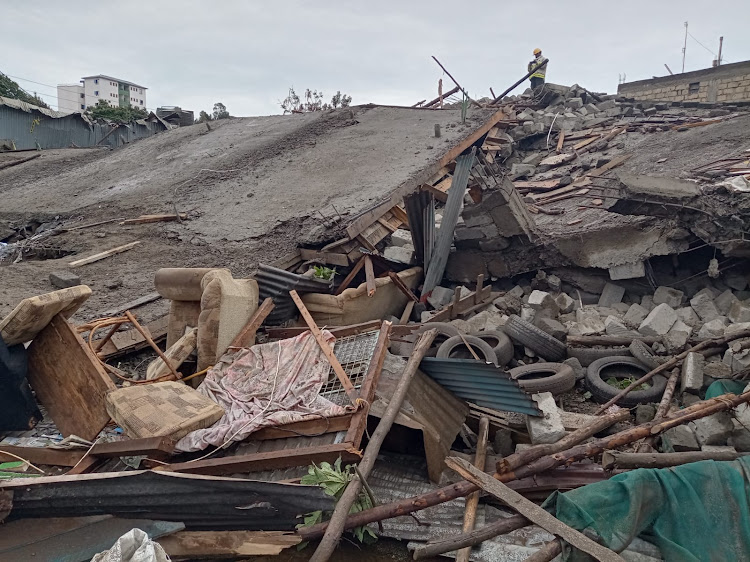 A structure under construction in Ruaka, Kiambu County, collapsed on a couple's home early on Thursday morning, resulting in their deaths.

The couple was sleeping in their iron sheet cottage next to the construction site when the six-story structure at Old Ruaka Road collapsed around 3.30 am.

A woman and two children were among the five people killed when the structure collapsed onto several surrounding residences.

During the incident, six other people suffered significant injuries. In Ruaka, the surviving family members of the deceased struggled to accept the death of their loved ones.

The man who lost his older brother, Antony Karomo, fought back tears as he described how he hurried to the scene only to discover his relative had passed away.

Since they reside in another home within the compound, their three children were unharmed.

“I live in the next building and when I heard the bang, I rushed outside. With the help of others who had come, we pulled out the rubbles but unfortunately my brother and his wife had died,” he said.

Watchmen who were manning the spot made it out safely. Kimani Wamatangi, the governor of Kiambu, went to the location to offer the family condolences. He regretted that building collapses had increased in frequency throughout the nation.

“We have agreed to sit down and find immediate ways of addressing this menace. We cannot continue to lose innocent lives like this,” Wamatangi said.

The governor said initial investigations have shown the contractor did not comply with construction regulations.

“People must face the law if they commit offences. If contractors do not want loses, they must adhere to the rules. We will demolish all buildings that have not been properly built,” he said.

“We will not wait for buildings to collapse. We will pull them down.”

Kiambu county commissioner Joshua Nkanathan said there was little possibility of people being trapped under the rubbles.

“No one is trapped under the rubbles. We will now start the next step of clearing the site,” he said.

City Hall and the NCA had warned the supervisor of the Kasarani building that collapsed yesterday about cracked walls, fresh details have revealed.
Latest
2 months ago
Latest
17 November 2022 - 10:27